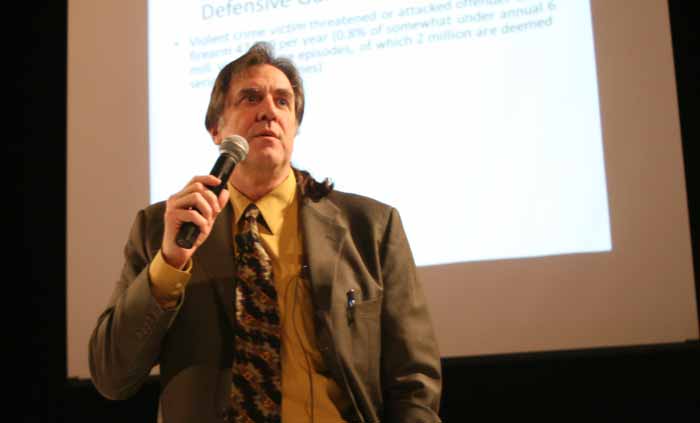 Concealed weapons permit owners in California are legally able to carry firearms on college or university campuses in the state, according to the California penal code.

The policy could potentially be in direct conflict with California law if a permit holder is punished by the university for carrying on campus, said Donald E.J. Kilmer Jr., a San Jose attorney who practices civil rights cases.

“I would be glad to take this kind of case to court,” he said. “It’s a civil rights violation.”

If a student has a restraining order against someone and they are in fear for their life, getting a permit to carry a concealed weapon usually comes next, Kilmer said.

A student that finds the need to carry on campus with a concealed weapon risks the chance of academic ramifications if they are caught, so it comes down to the decision of self-defense or being suspended, he said.

“I would need to represent them before a situation happened because unlike a civil disobedience case where you may have a student protesting and taken away in handcuffs, someone may get shot by the police if they are found with a gun before they can provide their permit,” Kilmer said.

Gun rights cases are being played out across the country, said John J. Donohue III, a professor at Stanford Law School.

“There are the gun right activists that want more access, and their are those who want more restrictions added to the laws,” he said.

A case where a student was sanctioned for carrying a gun on campus with a permit would likely find its way to the U.S. Supreme Court, Donohue said.

On Feb. 13, a California ninth circuit court of appeals decision found that it was unconstitutional to require “good cause” as a prerequisite for obtaining a permit.

On Feb. 27, California Attorney General Kamala D. Harris filed a petition to appeal the ninth circuit court’s decision on requiring good cause to grant a permit.

Within a month following the decision, the Butte County Sheriff’s Department saw a 57 percent increase in permit applications according to Kory Honea, undersheriff for Butte County.

TJ Carter can be reached at [email protected] or @theorion_news on Twitter.