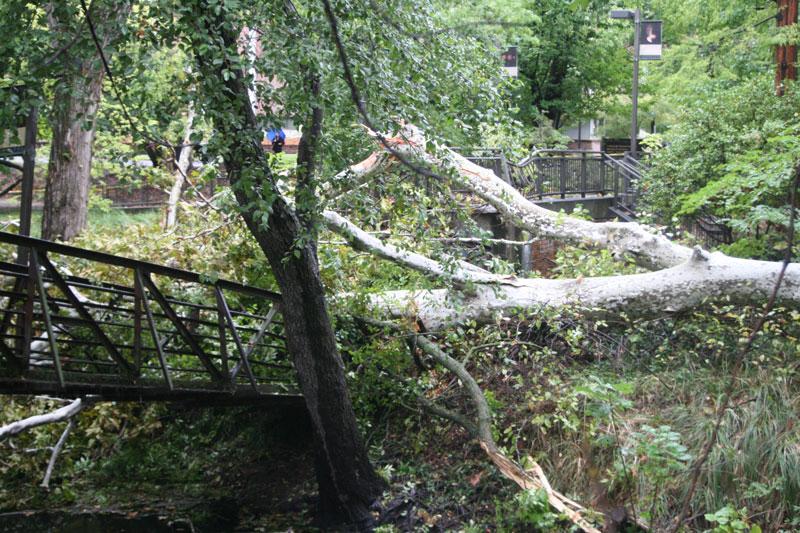 David Mcvicker
A tree along the Big Chico Creek fell and destroyed a bridge Thursday.

A large sycamore along the bank of the Big Chico creek fell striking the Gus Manolis Bridge after a downpour of rain and wind Wednesday night. No one was injured in the fall.

The bridge, located right behind Selvester’s Café-by-the-Creek and one of nine of the campus, was blocked from access Thursday as a team of Facilities Management inspected the damage.

The more than 100-foot-tall sycamore had been rotting from the inside a number of years, according to an employee of Richards Tree Service, who is contracted by FMS to inspect and remove dangerous foliage.

It is still not clear of the exact cause of the rot, however Mike Alonzo, supervisor of grounds and landscape services, said it had no connection to the cause of the fall August 2013 that killed Chico State student Pa Houa Lor.

Because there are thousands of trees on campus, it is difficult to inspect all of the trees on a regular basis, said Alonzo.

“We really evaluate based on a safety-first basis,” he said. “Areas that are near buildings or people are our first priority. Anywhere people can be injured by falling debris.”

The issue of who is responsible for regular tree maintenance is a contentious one as the City of Chico, the Department of Water Resources and Chico State share jurisdiction of the banks of the Big Chico Creek, according to an FMS employee.

Travis Barnett, maintenance and operations supervisor, said FMS is just trying to keep people away from the bridge for their protection.

“Right now we’re just trying to figure out easements, things like that,” he said. “Our first priority is scene safety first and foremost. As soon as we know more we’ll come in here and figure out how to remove the tree and everything that comes along with that.”

Langford said the campus’ first priority is that of its members.

“We’re very concerned with student and staff safety,” she said. “We regularly inspect the trees with the arborist that we employ. Unfortunately with the big storm there are so many things that are unforeseen, but we’re going to do all we can to understand what happened and continue to make the campus a safe place.”