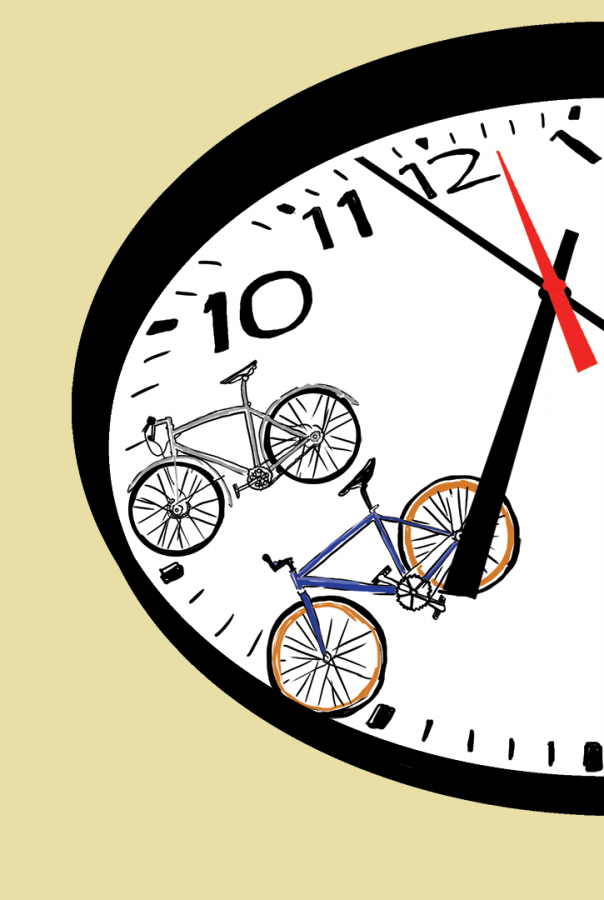 In front of every building at Chico State, there is an abundance of bike racks. In fact, a person is likely to struggle to even find an entrance to a building that doesn’t have a bike rack— nevertheless an empty one.

It’s mind boggling to me that with this many bikes at Chico State, students are never allowed to ride them on campus with the exception of one allotted path parallel to the tennis courts.

The university has a zero tolerance policy to bicycling, skateboarding and rollerblading on the campus at any time. If a student gets caught they will have the choice between a ticket or pay for an online training program.

This means that if I’m in the library at 11 p.m., I have to walk in the dark alone through campus before I can get on my bike and ride away to the safety of my home.

I find this ironic considering the emails we are constantly getting from University Police Department telling us to never be walking alone in the dark to avoid being victims of crime.

Three years ago, Kristina Chesterman was hit by a drunk driver on Nord Avenue on her way home from the library at 2 a.m.

If she would have been able to cut through campus on her bike without fear of a monumental ticket, it’s possible she wouldn’t have taken the dangerous and narrow route.

Before former University Police Department Chief Herne’s “retirement,” she had hoped to expand bike paths on the outer borders of the campus but was adamant against allowing bikes on campus.

In an interview, Herne said she was worried even when there is hardly anyone on campus, students could still be hit by reckless bikers because they might not be able to hear them coming.

Isn’t this true for all aspects of life? Accidents happen to people who aren’t paying attention and collective punishments aren’t a reasonable way to solve this fact.

It is also possible that I could be hit by a kid running down the stairs of Butte to make it to his next class and tumble to my demise. Would Chico State ban running on campus?

The solution seems clear to me.

Chico State and University Police Department should work together to compromise on a set of hours that bicycles and other wheeled and non-motored transportation are allowed on campus. By the way, why aren’t scooters banned too? I see students mobbing through the gauntlet on Razor scooters all the time.

Obviously, bikes shouldn’t be on campus in the middle of the day when the bridge is covered in students packed together like Buck Night at Riley’s.

However, there is no reason that from 7 p.m. to 7 a.m. students shouldn’t be able to bike their way from Modoc to O’Connell and everywhere in-between.

If these hours are set, the entire student body and faculty will be aware of them and hopefully can understand that unless they are careful, they might get whacked.

I have the same chance of getting hit by a rule breaker now than I would if we actually allowed them on campus.

The city provides a lot of resources for bicyclists and we should encourage students to be biking to and on campus.

It could even clear up some parking spots for the students advocating for another parking lot.