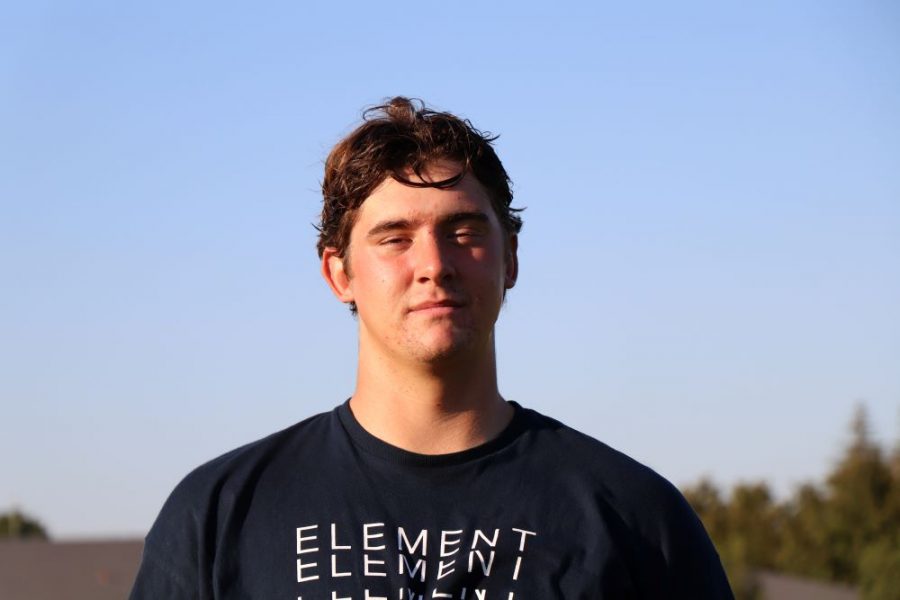 The passion for sports runs through the veins of tri-sport athlete, Aidan Finney of Pleasant Valley High School. Finney, a senior this year, plays football, baseball and basketball for the Pleasant Valley Vikings. While excelling in all three, football tugs on the strings of his heart a little bit more. As a football commit for Arizona State University, he looks to continue his football career and see how far it can take him.

Around age seven, Finney began dabbling in the sport of football. He took a couple of years off from football to play baseball and basketball, but later found himself back out on the turf again.

With a 14-year-old brother, Brendan, who plays baseball and basketball, and a 12-year-old sister, Miley, who plays volleyball and basketball, athletic blood runs through the Finney family. Finney mentions how Brendan looks up to him as a person and as an athlete, being that the two are very similar in many ways. Both brothers have size in their favor, as they are both big, strong kids looking to continue growing.

Not to mention, Finney’s parents provide a great support system for him, as they are at as many football games as they can attend and cheer him on throughout each step of his football career.

Finney notes that his greatest football accomplishment as a Viking was winning the State Championship last year in 2018. During the last three games of the 2018 season, Finney’s junior year, he switched positions from tight end to tackle.

One of the Viking’s tackles went down, and position changes were put in play for the team. Coach Mark Cooley threw Finney into that game as tackle, and Finney stepped up and played hard despite being in an unfamiliar position. From then on, Finney stuck to tackle and learned to adapt to this new position.

“It wasn’t a huge change technique wise, but I put on a lot of weight and a lot of size, and in the end it was a good decision,” Finney said.

Earlier this year in March, Finney received his first college offer from Oregon State University. As the months progressed, Finney found himself going on college visits, meeting and talking with coaches of various schools, and being bombarded with more offers. He was wanted, no doubt.

Finney began to narrow down his schools by where he felt was right. He mentioned that it’s not just about football, so he looked at academics, location, weather and other factors and took them into consideration.

“I was pretty much thinking about it day and night,” Finney said. “It’s a big decision, so it wasn’t something I wanted to be short with.”

After about four months of heavy thinking and planning his future, he had made his decision. Despite the tough times he encountered upon choosing, he did not take his recruitment process for granted. At the end of July 2019, he announced his commitment to Arizona State University.

“I think the coaching staff there was a big part for me, especially the head coach, Coach Herm Edwards,” Finney said. “You watch videos on him and see the way he talks to his players and the way he leads his team. I think that was really what drew me to them.”

Finney feels very blessed to be able to play ball at the next level, and he is eager to show ASU what the name “Aidan Finney” is all about. His friends and loved ones are looking forward to following his football journey next year as he embarks with his new team in Tempe, Arizona.

“A goal of mine for next year would be to be able to compete and hang in with the older kids and the upper class men, and show that I deserve to be there,” Finney said. “I’m not just a big kid but I can play, too,” Finney said.

Karina Cope can be reached at orionmanagingedit[email protected] or @KarinaICope on Twitter.