Isaiah Brooks dribbles the ball down court in round one of the CCAA playoffs.

The Wildcats escaped with a crucial win at Acker Gym Tuesday night as they took down the Stanislaus State Warriors by a score 75-73 in overtime.

It was a back and forth battle throughout game one of the CCAA playoffs with the Wildcats trailing most of the night. Quite possibly the most nail biting moment of the night came with just 11 seconds remaining when Malik Duffy got fouled and was sent to the free throw line.

The Wildcats were down two points and desperately needed Duffy to drain his free throws to tie up the game. Duffy confidently walked to the line with a dead silent gym on either side of him. He drained both his free throws, causing an uproar in Acker Gym and tying the game 68-68.

Malik Duffy guarding the ball against Stanislaus State during the CCAA playoffs.

“I missed two other ones early in the game,” Duffy said. “I hate missing free throws. I just stepped up there with confidence, and those shots kept us in the game.”

Another star, Justin Briggs, started the night with a jumper and a dunk, which put him at 1,000 overall points in his career. He became the 20th player in Chico State history to reach this milestone. Even with his momentous start, Briggs knew it was not going to be an easy game.

The game began with each team exchanging buckets at each side of the floor. It was 16-16 before the Warriors erupted for a 10-0 run courtesy of 3-pointers from Luis Salgado and Daruis Scott.

Then, junior guard Kevin Warren took over in the final minutes of the first half. He caught fire and went on his own 8-0 run to get the Wildcats back into the game. Warren was most impressed with how his team battled. 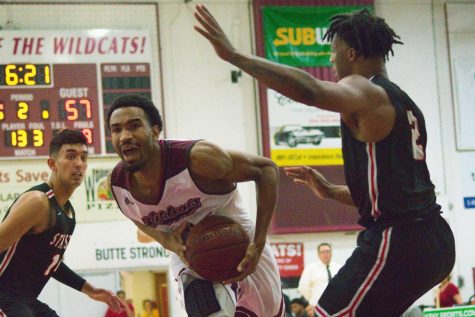 Kevin Warren looking for an open teammate in round one of the CCAA playoffs.

“I think we went through a bunch of ups and downs,” Warren said. “Through the stretches we would have liked to play better. I just like the way we fought. We tied it up and took it to overtime and overcame adversity.”

The second half mirrored the first. Both teams exchanged buckets with no established lead. Once the game reached the final few minutes, the Wildcats were able to get key stops and drain clutch free throws to keep them in it.

Once the overtime period began, the Wildcats were adamant about not letting this home playoff game slip from their hands. They established a quick 5-0 run with a crucial 3-pointer from Calvin Geraci.

Moving forward with this victory, the Wildcats will now travel to La Jolla for the CCAA Tournament semifinals taking place on March 6 against UC Davis.