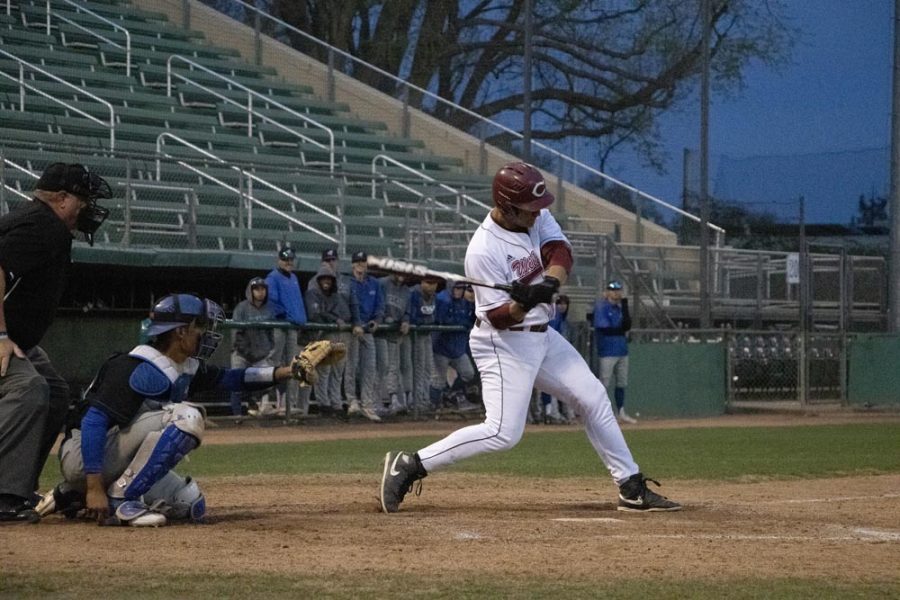 The Wildcats picked up a series win at Nettleton Stadium on Sunday after taking down the Cal State San Bernardino Coyotes 9-0. This makes for back-to-back series wins for the Wildcats.

Skylar Limonchi and JT Navarro helped carry the Wildcats (15-7, 11-5 CCAA) to their win. Limonchi has not seen the field much this season but did damage throughout this series over the Coyotes (7-15, 4-12 CCAA) by collecting four RBIs throughout the weekend.

“I think we swung the bat well today,” Limonchi said. “We were aggressive in counts we needed to be. For me, I have been just trying to be more aggressive at the plate.”

Josh Verdon, a junior RHP, was on the mound and pitched four solid shutout innings. He only allowed two hits and two walks.

Verdon’s carries a fastball, curveball, changeup and slider in his pitching arsenal. He found most of his success while using his fastball and curveball.

Coach calls for a meeting on the mound with all the infielders against Cal State San Bernardino.

The Wildcats got off to a quick start and collected three early runs in the second inning. They loaded the bases and brought all three home courtesy of RBIs from Tyler Stofiel, Limonchi and Navarro.

After the second inning, the Wildcats put up four more runs. They were able to load up the bases again and bring them all home. A wild pitch brought one run home and a two-run RBI from Navarro cleared the bases.

“We played good defense and got hits when we needed to,” Willie Lajoie said. “We were aggressive in early counts. We played well together as a team.”

Lajoie explained that the team saw a lot of changeups. Pitchers often like to start by pounding fastballs early in the count and then sprinkle in a variety of changeups and curveballs.

This win puts the Wildcats at an impressive 12-3 home record. The Wildcats will hit the road for their next series against California State Los Angeles, beginning on March 13 at 6 p.m.