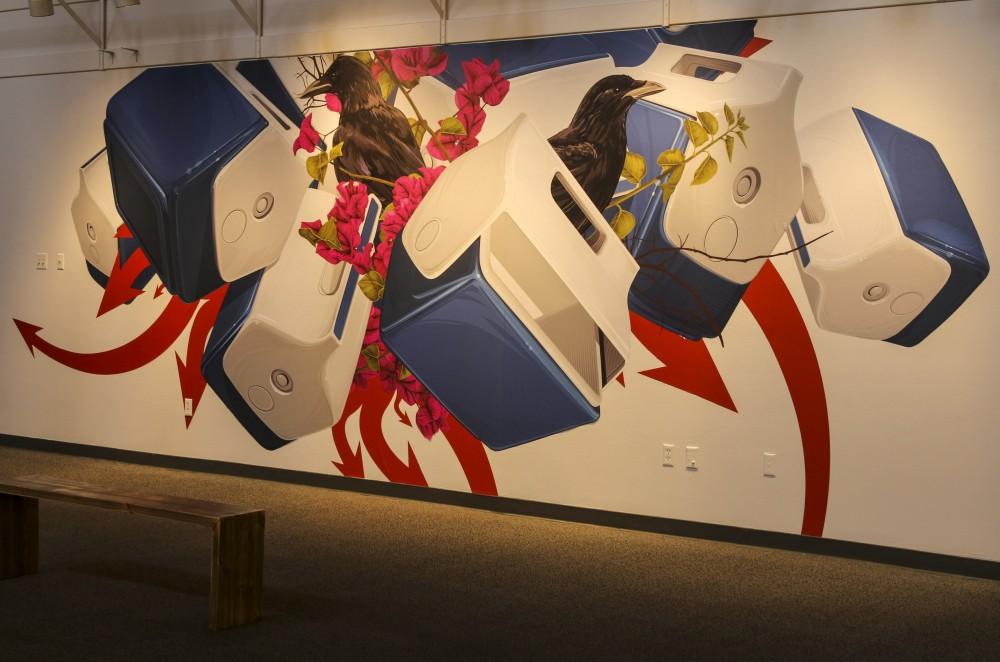 Luke Matjas's show is called "A Swirling Cloud of Dust and Gas Like This." It will be on display in the University Art Gallery until April 10th. Photo credit: Grant Mahan

Four small, framed graphite drawings hang on the back wall of the University Art Gallery. The eye is drawn to three orange traffic cones that hover over the gallery attendant, lying flat on the wall as if painted on.

Luke Matjas’ art exhibit “A Swirling Cloud of Dust and Gas Like This” will be in the University Art Gallery in 100 Trinity Hall until April 10. It features digital prints that fit together like puzzle pieces, creating room-sized images.

“I’ve seen a lot of art in my life, but this totally blows me away,” saidJ. Paul DiMaggio, publicist for the College of Humanities and Fine Arts.

Surrounded by black crows and pink flowers, several blue-and-white ice chests expand from the print on the facing wall, with red arrows shooting out in all different directions. To the right, an owl pokes its head out between a mess of laundry detergent bottles intertwined with a green hose.

Three of Matjas’ prints will be on a three-year tour in California as part of the traveling exhibit called “Ignite! The Art of Sustainability.”

Matjas brought his parents Feb 28, and they installed the show together, said Tiffany Carpenter, gallery attendant and junior double major in Asian studies and studio art. He had to make some custom adjustments to fit the prints around the outlets on the wall.

“I would cover my walls with this,” Thompson said.

Matjas’ work is influenced by his interests in museums, space, science and nature, Matjas said at the artist talk March 6.

He always admired how museums make constructive narratives to create a sense of drama, Matjas said. Similar to his life-size prints in Trinity Hall, the placement of his work and the use of space creates a sense of drama.

“One of my favorite places to go is Home Depot,” Matjas said. “Everything in there is about altering space.”

Because traffic cones are a way of directing people in space, they inspired him to create the 3-D looking prints, Matjas said.

“I wanted to see if I could create bigger experiences,” he said.

As a child, Matjas was obsessed with dinosaurs and sincerely thought he would uncover a dinosaur fossil in Orange County suburbia, Matjas said.

With no such luck, he studied printmaking at UC San Diego and UC Santa Barbara, Matjas said. But it wasn’t until later in life that he discovered how to combine his artistic ability with his three interests.

He is now an associate professor of art at Cal State Channel Islands and his work has been seen from Los Angeles to Sweden.

The show is colorful, detailed and represents the wondrous cycle of life.

“A lot of artists at Chico State need to come see it,” DiMaggio said.