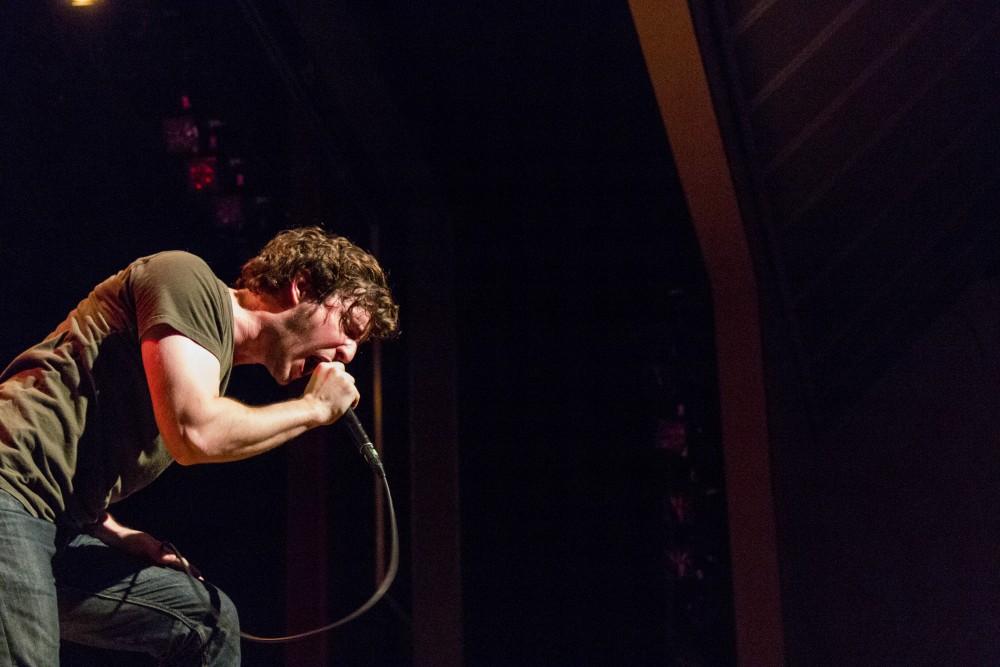 Ashiah Scharaga
Dance Gavin Dance’s lead singer Tilian Pearson high-fives and fist-bumps a crowd member pressed against the Bell Memorial Union stage. Pearson smiles and launches into high notes that most people wouldn’t brave in the shower, while his bandmates play fast-paced, energized rock riffs. The post-hardcore, experimental band from Sacramento had the crowd moshing, lip-syncing, fist-pumping and even crowd surfing on Friday night for a concert presented by Union Label and KCSC Radio, both parts of Associated Students. The group headlined a concert opened by Icarus the Owl and Clouds on Strings. Though most numbers were fast-paced and appropriately mosh-inducing, Dance Gavin Dance often experimented with song tempo. During brief, mellower moments in songs like “Strawberry Swisher Pt. 3,” Pearson’s raw vocal talent radiated.In other songs, such as “Me and Zoloft Get Along Just Fine,” vocalist Jon Mess screamed with an intensity and precision that instantly amped up the crowd.Clouds On Strings, a band of Chico locals, played funky, jazzy, progressive rock that included electric violin and keyboards. The band smoothly transitioned from one song into another, setting a mood at the opening of the show like a kick-back jam session. Keyboardist Joshua Hegg’s musicianship is impressive; his hands deftly and effortlessly stretched across two keyboards. Violinist Matthew Weiner proved he could rock just as hard on a violin as anybody could on a guitar: jumping, head-banging and shredding his bow enough for tufts to stick out of its end. Icarus the Owl, an alternative rock band from Portland, Ore., took the stage after Clouds on Strings. Lead vocalist Joey Rubenstein has a vocal quality in his higher register that is quite stunning, stylistically similar to Matthew Bellamy of Muse. Rubenstein is a talented screamer and his live vocal quality sounded studio pristine. The band’s frequent use of time-signature changes and tapping guitar style were highlighted in songs such as “Dethroned.” The fingers of bassist Zach McLean and Rubenstein, also a guitarist, rapidly crawled across the necks of their guitars like cracked-out spiders. The bands received a raucous applause from the crowd at the show’s end. “One more song!” was chanted faithfully until Dance Gavin Dance came back on stage. They performed “Rock Solid,” chosen for the encore after it was shouted by an enthusiastic audience member.Sarah West, a junior music industry major, was front and center during the concert and even crowd surfed. She thought the show was great, she said, and that the BMU provided an intimate venue that allowed audience members to feel like they connected with the band. “My favorite song that they played was ‘Carl Barker,'” West said. “The raw energy of the whole crowd was just so intense.” Ashiah Scharaga can be reached at [email protected] or @AshiahD on Twitter.
Delete Image
Align Left
Align Center
Align Right
Align Left
Align Center
Delete Heading