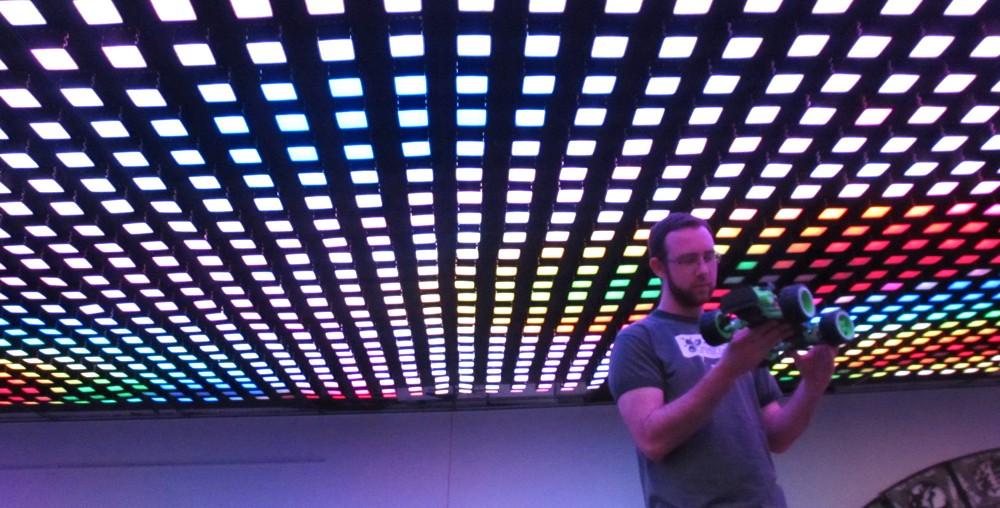 Tiny squares of LED lights cover the ceiling of the Idea Fabrication Laboratory’s main room. As seconds progress, each square changes color, creating a wave-like motion. These aren’t just colorful squares, the light-emitting diodes are RGB pixels — there are 2,880 of them, to be exact.

Opened in May 2013, Fab Labs is a place where members can make their ideas into realities. Members pay a monthly fee, which gives them access to the space, equipment and the creative minds of other members.

For the first time, Fab Labs invites both members and nonmembers to submit their creations to the IFL Maker Showcase, which takes place on April 26.

The current idea Layman and his colleagues are trying to create is a human game of “Pong” using the ceiling of pixels and Microsoft Kinect technology.

“This is a product of our ongoing conversation,” Layman said.

Unlike most creators, members of the Fab Lab are required to share their expertise and collaborate.

“If you’re concerned about that, don’t bring it here,” Layman said. “We want people to teach what you do.”

Ian McNanie, a 16-year-old junior at Pleasant Valley High School, hopes to get involved with the human “Pong” coding, he said

“I’ve always worked on programming and electronics,” McNanie said. “I like being around other programmers, especially in Chico.”

Just about any extension of yourself is submittable. It sounds vague, but that’s the point.

There are three types of submissions: the first is a gallery submission, anyone can submit up to two pieces with a 20 percent commission on any sales. Nonmembers must pay a $20 submission fee.

The second is an exposition or demonstration. Layman describes this category as “look at this thing I know how to do.” Dance submissions have already been made, so don’t hesitate to showcase your shower singing to the community.

The third submission is vending. So if you think people will buy it, go ahead and submit it. There is a $40 submission fee for nonmembers and a $20 fee for members.

If you don’t have anything to submit, check out what Chico creators have been doing. There will be drinks, music and a food truck parked outside. If you’re still not sold after reading about the food truck, they have a laser cutter and a 3-D printer!

Submissions can be made online at ideafablabs.com. The deadline is April 12.