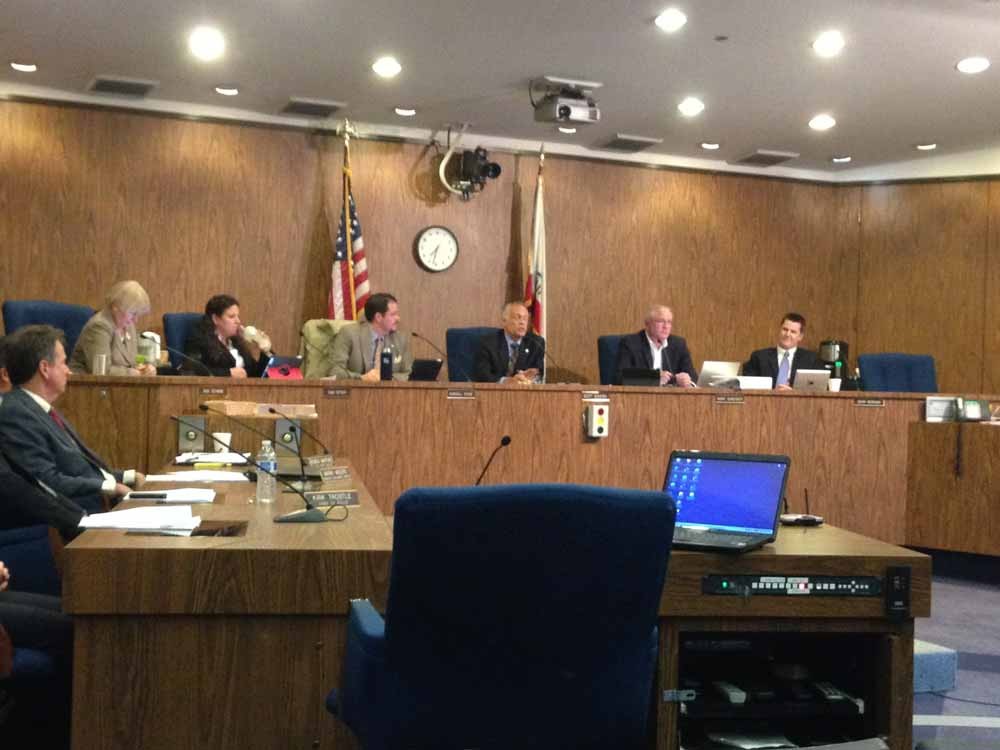 The City Council meets to consider an ordinance that would ban the use of plastic bags in Chico. Photo credit: Bill Hall

Bill Hall
Chico is back on the path to banning the use of plastic bags with the adoption of an ordinance that would impose regulations on retailers beginning next year.

The City Council voted on Tuesday to approve the newest version of the ordinance by a 4-2 vote. Previous versions of the ban were adopted in 2013 but then postponed due to legal challenges in other California cities. These challenges have since been decided in favor of the municipalities.

A statewide plastic bag ban, Senate Bill 270, is making its way through the Legislature and if passed would take effect July 1, 2015.

“I don’t want to wait on SB270 to be approved,” said Council Member Ann Schwab. “I think that the desire in the community is to support this ordinance and I’d like for us to move forward with this.”

The new regulations would take effect on Jan. 1 for stores that have gross annual sales of at least $2 million or that have more than 10,000 square feet of retail space that generates tax revenue. Convenience stores or similar small retailers that sell grocery items would be subject to the regulations beginning Jan. 1, 2016.

The ordinance includes exemptions for prepared foods, produce, bulk foods, meat, prescription medication and for separating items that could contaminate other items if placed in the same bag.

Stores would be required to provide recyclable paper bags and charge at least 10 cents per bag. People participating in the California Special Supplemental Program for Women, Infants and Children, or other government subsidized programs for low-income persons, would be provided bags at no cost.

“It changes the question at the register from ‘Do you want paper or plastic?’ to ‘Do you need a bag?’” Keller said.

However, most members of the public who addressed the council on Tuesday were against the city taking any action.

The city should be focusing on its difficult financial situation and leave this issue to be handled at the state level, said resident Stephanie Taber.

“If the state goes ahead and does it, then we should do it, because we have no choice,” Taber said. “But for us to take this step first is unconscionable.”

Vice Mayor Mark Sorensen, who said this is an issue that should be left to businesses and their customers, echoed similar sentiments.

As long as the ordinance comes back for final reading and adoption prior to Sept. 1, it can still be enforced locally even if the state bill is eventually passed.

· A final reading and adoption of the social host ordinance, which imposes penalties on hosts of parties at which underage drinking is taking place, was approved. It will take effect in 30 days.

· Pay and benefit resolutions were approved for the last two of the city’s nine employee unions. Both Stationary Engineers Local 39 and Service Employees International Union Trades and Crafts Unit signed three-year agreements, generating savings of $81,772 and $362,894, respectively. All union negotiations are now complete and, along with management concessions, produced savings of over $4 million.

· An agreement to contract with law firm Alvarez-Glasman & Colvin for comprehensive city attorney services was approved. The city will pay a monthly retainer of $25,500 for up to 170 hours of legal services. City Attorney Lori Barker is retiring this month after 24 years of service.