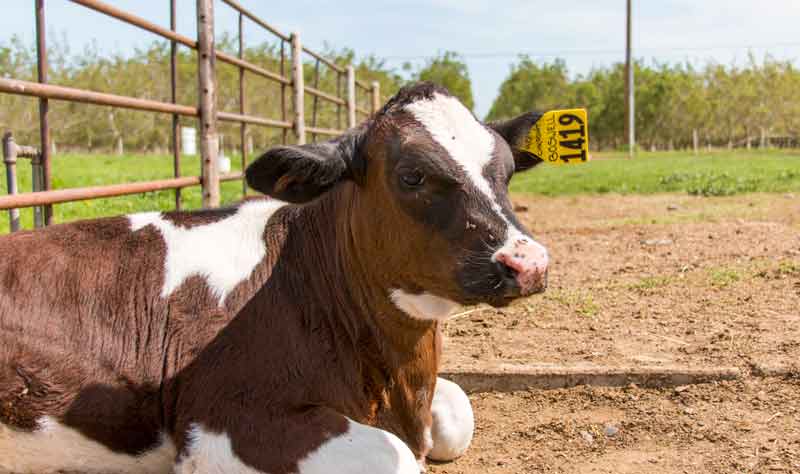 Boswell the calf soaks up the sun at Chico State's University farm. The farm is having to pay more for live stock food due to the increased prices the drought is causing. Photo credit: Grant Mahan

Eric Mccauley
Chico State’s University Farm has not had enough rain this year to be able to produce nearly as much feed as it used to.Low rainfall has drastically increased the price and demand for crops, said Cindy Daley, manager of the University Farm’s dairy farm. At the same time, feed crop suppliers have not been able to produce as much either, and both the shortage of and the demand for these crops have lead to severe price increases. The organic dairy farm has been hit especially hard by the drought because there are far fewer options for the quality of organic animal feed, she said. The dairy farm has gone from paying just under $300 to $365 per ton of alfalfa to feed their cows, Daley said. Paying $300 was already high, and they are expecting to see further raises in the price, she said.Prices of compost and other necessary soil inputs have also been raised due to the low supply, Dailey said.”We are paying extremely high prices for certain necessities that we used to be able to produce ourselves,” Daley said. “We will survive, but there is just no way we will make any money this year.”The dairy farm usually sustains about 90 cows, but this year they have had to sell off a good portion of their cows, bringing them down to 70, Daley said.Also affecting California farmers is the zero allocation of water from the State Water Project, prompted in February.The university farm does not have water allocated to them from the state, but many Butte County farms rely on those allocations, Daley said. “Now everyone who was getting water from the state is switching to their pumps and their wells and sucking it out of the aquifer,” she said. “And there’s only so much aquifer.”Eric McCauley can be reached at [email protected] and @theorion_news on Twitter.
Delete Image
Align Left
Align Center
Align Right
Align Left
Align Center
Delete Heading