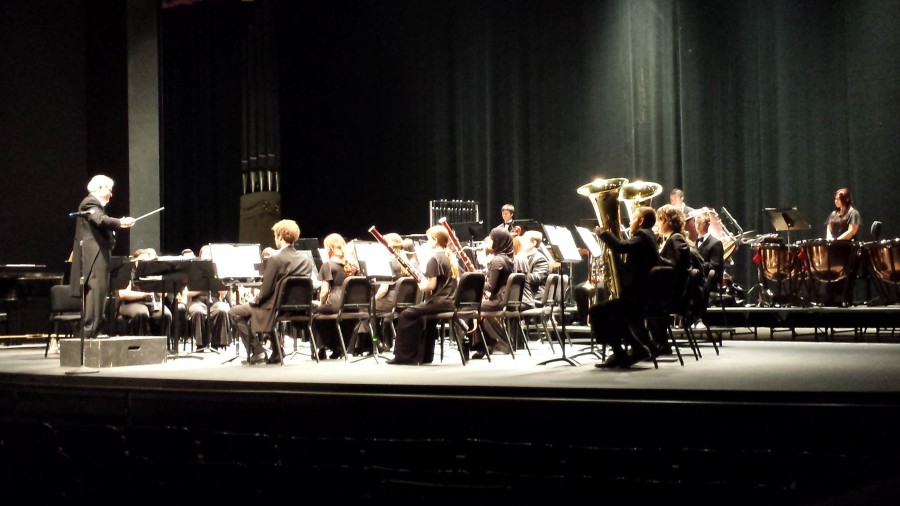 The Chico State School of the Arts department of music and theatre presented the Symphonic Winds “Band-ology” performance Saturday night in Harlen Adams Theatre. A fairly small audience attended the performance and was highly pleased by the offering of musical talent.

The performance consisted of a number of songs of various styles, all played with feeling and gusto.

The “Gavorkna Fanfare,” written by Jack Stamp, was theopening number. It was written at the request of his teacher Eugene Corporon for a 1991 college band conference.

The name Gavorkna was made up by Corporon after the piece was completed and doesn’t mean anything. The audience was welcomed by the conductor and introduced to the second piece after the fairly short opening.

“October,” written by Eric Whitacre to capture and elicit the feeling of his favorite month, was a simultaneously soaring and beautifully elegant composition, equally as wonderful as any month of the year.

For the third number, the audience was introduced to Heimlich, the guest clarinetist for the evening.

Heimlich and the rest of the ensemble proceeded to delight with the “Concerto for Clarinet and Wind Ensemble,” written by Frank Ticheli. This work ranged from ethereal and soaring to an energetic and almost frantic section that proved the exceptional talent of the ensemble.

This led directly into the celebration of America with John Philip Sousa’s “Hail to the Spirit of Liberty” and “An American Overture,” by Joseph Willcox Jenkins.

Both pieces displayed rousing celebrations of life and liberty in what has become a very American sound. Tevis also pointed out that not only were the pieces switched in order from the program, but the beginning of the overture was altered to reflect its composer’s original desires, a fact most likely more understandable to those who have taken clarinet lessons.

The event continued with “Tam O’Shanter,” which was introduced by Tevis as the story of a man who’s had too much to drink and happens upon a group of dancing witches.

The floating piccolo and ominous bass told the story well and the explanation before served only to improve the experience of yet another remarkable show of skill.

The penultimate number was a collection of pieces titled “Lincolnshire Posy” composed by Percy Grainger, as Tevis explained, to honor the traditional singers of many English folk songs.

The evening concluded with “Cyrus the Great” by Karl L. King, a composer who taught himself music with almost no traditional schooling. The piece was, despite this fact, also quite exceptional.

The performance was, if anything, better than expected and an amazing presentation of the Wind Ensemble.

The event was well worth the price of admission and everyone should be on the lookout for more events such as this in the future.

David Kahn can be reached at [email protected] or @thatdavidkahn on Twitter.