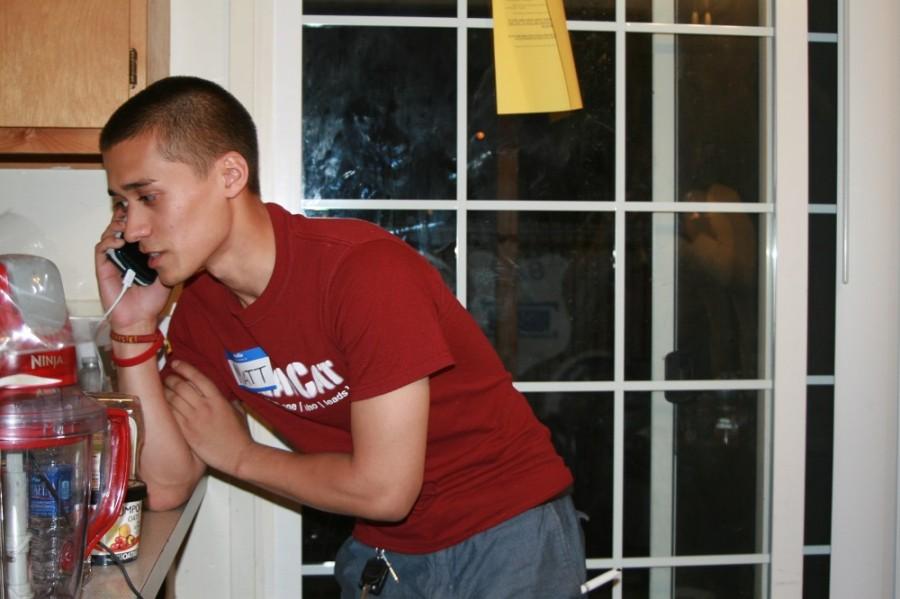 Matthew Riebe answers a request for a ride from a student at about 12:40 a.m. Saturday. Photo credit: Shayla Ramos

Matthew Riebe, a junior public administration major, and his staff are packed up early on Saturday morning and ready to leave. But on the drive home, the group notices a man walking with a black eye.

They stop the car. The man says he got into a fight and has no idea where he is. There is no room in the car, but the group knew he needed a ride. So, one of the team members decides to ride his longboard all the way home.

Student volunteers for Your Safe Ride Home are used to making sacrifices like this.

Every Thursday through Saturday, Riebe, who started the group last semester, gets to his dispatch station, the Phi Delta Theta fraternity house, at 11 p.m. to set up for the night.

Emily Jones, a junior child development major, is the secretary and has taken on the hospitality unit. Riebe calls her the “mom of the group.”

Jones was surprised by how fast the program was picked up, she said.

“It just started up with Matt just picking up his friends, and it just reached a bigger audience,” Jones said. “I think it’s great.”

Staff members begin to arrive. Morgan Rowley, a senior business major, is the chief operating officer of communications. The drivers and co-pilots are all Red Watch Band certified.

Rowley is proud of what Riebe is doing and offered her services.

“He really wants to make this its own organization in the future, so he needed some help, and he had no business experience,” Rowley said. “We’ve been doing a lot of research on how to be a nonprofit.”

The sounds of rowdy students can be heard. Taylor Klein, sophomore child development major and director of recruitment, shows up.

He and Riebe heard of other campuses having a designated driver service, so that was the starting point for everything to come.

“Next thing I know, a week goes by and Matt has already developed this into a program,” Klein said. “A thousand people know about it, and Matt asked me to be a part of it.”

Though Klein’s life is filled with late hours working as a desk attendant at Esken Hall, he still took the position.

“Matt’s one of those guys that you just can’t help but to say ‘yes’ to,” Klein said.

The first call came through the Google Voice app.

Riebe and his co-pilot drove from downtown Chico to 11th and Hazel streets. He picks up three young women who are pretty far from home, and one of them has a terrible case of the hiccups.

During the ride, the passengers ask Riebe if he is doing it from the kindness of his heart.

Future of the program

Riebe is withdrawing from Chico State next semester to fully focus on the implementation of Your Safe Ride Home.

“I realize that being a student is supposed to be a full-time job,” Riebe said. “I also had a part-time job, and I’m trying to start a new business. Altogether, it became pretty chaotic in my own life. This is the best way for me to save my grades and also bring up the service.”

Once the group is grounded, it would like to work with businesses in the community to maintain the free rides.

As Riebe and staff try to figure out what they want their business entity to be, they are also thinking of offering a grant they will call GRACE: “Gratefully Rewarding Awareness in Community Efforts.”

It will be used to better the community.

“The idea is that we’re going to be providing a great service for our students, but then students will also get to contribute back to the community through this GRACE fund by becoming part of the solution by giving people rides,” Riebe said. “Just making sure that we can go hard and go home safely.”

It’s scary to be liable for everything, he said.

“I know that this is a good cause and that it’s worth it,” Riebe said. “I feel like the liability is just a molehill in what I want this program to develop into.”

Most of the time Riebe doesn’t sleep until 6 a.m. He likes to joke around and call himself Batman.

“I don’t have a Batmobile,” Riebe said. “Just a Ford Taurus.”

The staff doesn’t only take drunk students home — they give rides to anyone who doesn’t feel safe.

“They are not a burden,” Jones said. “We want them to feel safe, drunk or sober.”

Prin Mayowa can be reached at [email protected] or @PrinSupreme on Twitter.