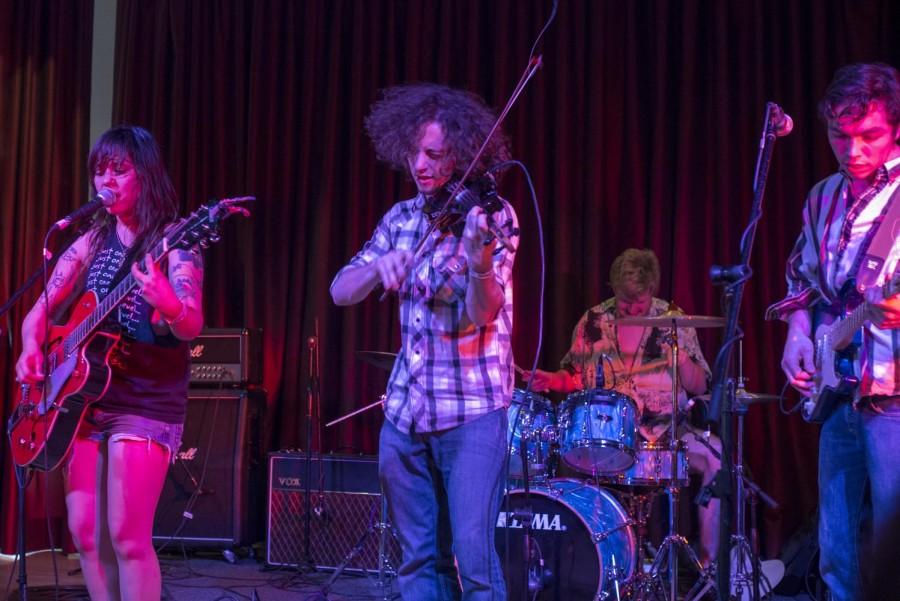 A baby in jean overalls and high-top Converse danced with his mom and dad at the 2014 CAMMIES finale awards show. Losing balance on his 13-month-old legs, he fell backward on his rump as Alli Battaglia & The Musical Brewing Co. performed on the main stage.

From 2-7 p.m. on Sunday the Chico Women’s club was rocking with two stages, twelve bands, a couple food trucks and 75 degree weather, which made this free community event, sponsored by Coors, a summertime tease.

Both Battaglia and pianist Glenn Tucker performed barefoot on stage. Like a strong whisper that carries throughout a room, Battaglia’s voice immediately enticed the audience.

Two little girls in sundresses danced together by the stage, their strawberry-blonde hair blowing in the breeze they created as they twirled.

Electric Canyon Convergence, one of the first groups to perform outside, sang of peace, acceptance and love. With a dozen band members, Battaglia included, their style ranged from hip-hop to soul.

Keith Kendall of The Blue Merles had kind words to say about Deedee Vest and Mandalyn May of Electric Canyon Convergence.

Back inside, Michelin Embers sang about a Mexican bandit who loved women and gold. Sounding like something from a Quentin Tarantino movie, the group inspired adventure.

His right hand wrapped in what looked like silver packaging tape, band member Steve Bragg plucked away on his “gutbucket” adding a unique twang to the performance.

“I liked how bluegrass-y they were,” said Sandy Seils, a concert attendee. “All the musicians were great.”

Mark “Porkchop” Holder, a one-man show who sang, played guitar and harmonica, was up next outside.

Peter Berkow, a well-known producer, teacher and writer, referred to the artist as “the real deal.”

It wasn’t hard to believe after seeing his chrome guitar with pie crust cutouts.

Back to the main stage for one of the event’s best performances — Aubrey Debauchery & the Broken Bones.

Debauchery totally rocked it. Her stage performance was too big even for the main stage. Walking back and forth toward the audience, she seduced the crowd with her rock star voice.

Outside, Bran Crown asked another artist if he could use his guitar because he broke a string during the first song. The artist obliges, and Crown continues his set.

“I hear a lot of energy in his vocals,” said Justin Stie, a senior music industry major. “He has pretty unique songwriting for just one man. He also gave me music theory lessons.”

It seems that local artists have been supporting and helping not only each other, but others in the community, too.

“We are Sapphire Soul; we were put into the blues category, but we’re going to play a little soul,” said lead singer Jonathan Arthur on stage inside.

Even though they did end up winning best blues act later that evening, they certainly proved to the audience that they do indeed have soul.

Married couple Kyle and Carrie Williams were last to play outside. Barefoot and dreadlocked Kyle, accompanied by his wife, soothed the crowd, encouraging them to sing along.

As a little girl in a blue tutu shared lemonade with her sister, fans filmed the musical duo with their cellphones and begged for an encore.

The couple performed a cover of Dave Mulligan’s “The Sierra Nevada Song.” He paused before the last two words of the song, waiting for the audience to chime in, “I wish I had a… (Sierra Nevada).”

Responding to the unexpected silence, Dave laughed and said, “you guys need a beer.”

A lifetime achievement award was given to Susan Dobra, who has kept the Chico Open Mic Nite alive for the past decade.