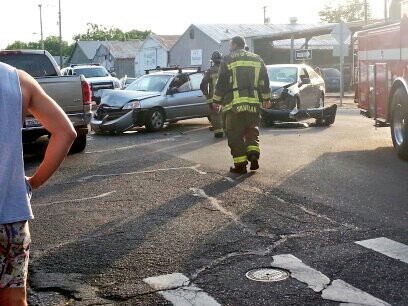 Firefighters approach the aftermath of a four-car pileup on the intersection of Ninth and Ivy streets. Photo credit: Emerson Keenan

Emerson Keenan
A pickup truck went into oncoming traffic on the intersection of Ninth and Ivy streets Saturday evening, resulting in a four-car pileup.No one was injured, said Chico Police Officer Peter Durfee. The incident occurred at approximately 6:20 p.m., he said. A Dodge pickup truck entered into the intersection going south and was hit head-on by two cars heading east on Ninth Street, he said. The crash caused the truck to spin out and hit a Toyota waiting to cross the intersection from the north side. Austin Carter, a Chico State student, was involved in the head-on collision.“I don’t know if he stopped at the stop sign,” Carter said. “It all happened so fast so it was pretty crazy. I’ve been in a crash, but I only got rear ended, so this was a lot different.” Tow trucks were on scene to move the three cars out of the road because they were all immovable. Chance Keenan can be reached at [email protected] or @chancelikelance on twitter.
Delete Image
Align Left
Align Center
Align Right
Align Left
Align Center
Delete Heading