Survivor speaks out against human trafficking 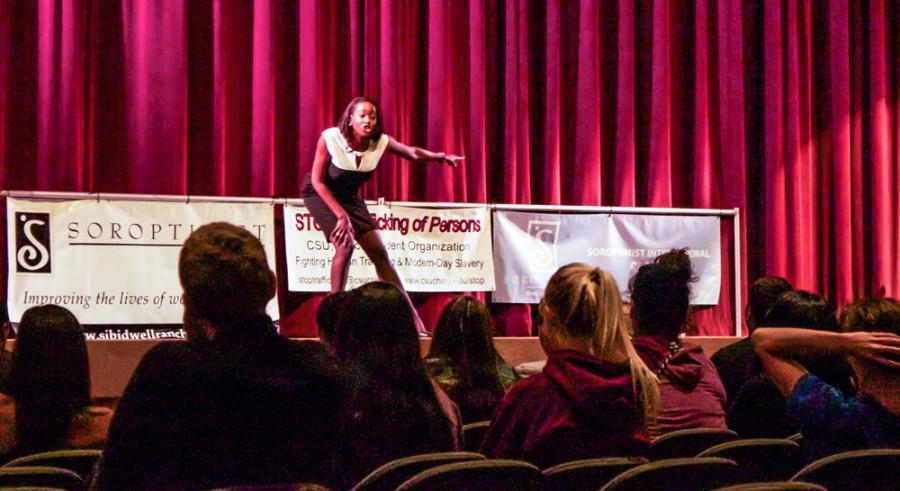 Shamere McKenzie knew that she didn’t want to die. Her body told her to run, so she headed to a stranger’s garage and found a man and his 2-year-old daughter inside.

“What are you doing?” the man asked. “Why are you running around here?”

Fearing for her life, McKenzie told the man a lie — that she was running away from her ex-boyfriend who was trying to beat her. The stranger closed the garage, gave her food, put her in a hotel room and gave her a phone to call her mother.

McKenzie was one of the survivor speakers for the third annual Human Trafficking Awareness Week hosted by Stop Trafficking of Persons April 14-17. Round table discussions, workshops and survivor speaker sessions took place on campus throughout the week,

McKenzie, now 31, was a junior at St. John’s University in New York on a full athletic scholarship when she met a seemingly polite man who turned out to be a pimp.

“So Prince Charming that I met by the car turned into a monster, beat the crap out of me, then turned back into Prince Charming, apologizing that he won’t do it again, and I believed him,” McKenzie said. “Even though I was 21 years old, I was naive.”

She then experienced 18 months of rape and near death experiences.

“I just gotta praise God, because how else am I here?” McKenzie said. “I know the struggle of being victimized by a pimp and victimized by our system. That’s why I do what I do.”

McKenzie wants to be a contributing member of society, building up from a survivor to a leader.

“I realized that that’s my passion, and that’s where I wanna go to bring about change,” she said. “When survivors have support, they can rise above it.”

Sharing McKenzie’s story made an impact on people, which was the goal for Janja Lalich, sociology professor and faculty adviser of Stop Trafficking Of Persons.

“I think hearing those stories makes it more real for people, like this is actually happened to them,” Lalich said. “This is very real and people really suffer.”

Fighting human trafficking is a great cause that won’t be going away for awhile, so there is a lot of work to do, she said. The students in the club are passionate about what they do.

Ashlley Martinez, a junior communication sciences and disorders major and president of Stop Trafficking of Persons, learned about human trafficking during her first year in college.

“I always assumed it happened to people over there in Thailand and other countries,” Martinez said. “Once I discovered it happened here in my own home, I felt like I had to do something about it, so that’s when I became a member.”

Amanda Hovik can be reached at [email protected] or @AmandaHovik on Twitter.