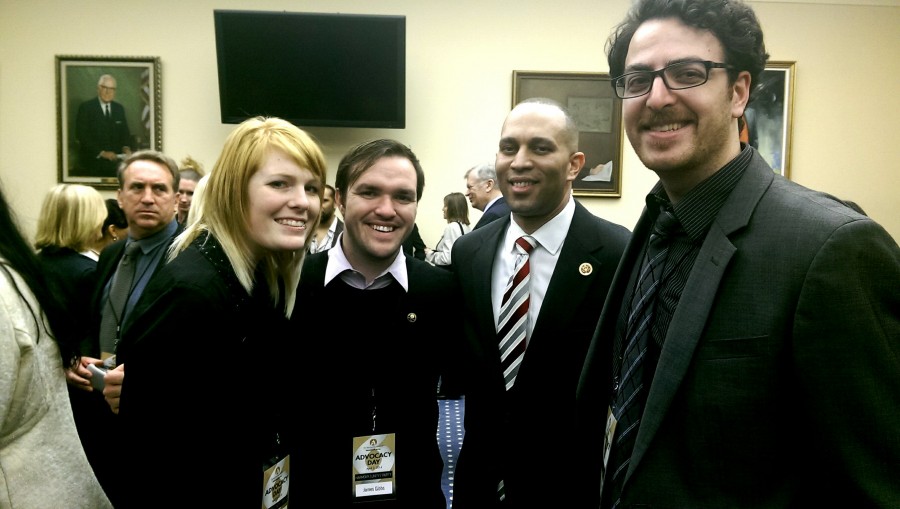 James Gibbs, Noah Ben-Eishai and Corrie Clark, Chico State music industry students, traveled to Washington, D.C. at the beginning of April to lobby for artists’ rights and attend the Grammys on the Hill Awards.

The Orion chatted with Gibbs and Ben-Eishai about being the first students to participate in this event, their favorite moments and the celebrities.

The Orion: Do you think Chico State should continue to be involved with this event?

Gibbs: 100 percent. People from all across the United States were able to see that Chico State has really informed students on these issues, who are passionate enough to go out and fly from California to D.C. for a little quick lobbying day. I think we made a lot of difference with being able to rebrand how people view Chico State’s music program. While we aren’t close to an immediate city, like USC, and we don’t have a huge program, like Berklee School of Music in Boston, this is a way that we can definitely stand out, because we were the only group of students at this event.

The Orion: What was one of your favorite moments during the trip?

Gibbs: One of the standout moments for me was actually at the awards dinner. Lady Antebellum was performing and they had a moment before they started where they’d received an award and they were just talking about how they don’t get nervous in front of stadiums full of people, but they were nervous in front of this crowd. And I hadn’t really thought about it until that point, but this crowd that I was part of and intermingled with were very, very powerful people in the music industry. Like, these are people who could make or break artists in a second if they wanted to. It was really cool to just realize that they were going to be right next to me for the next day and we were going to be doing the same thing and accomplishing the same goal. And in that way, I was kind of their peer. And that was really cool for me. It was like a hint of things to come.

Ben-Eishai: I think another moment I really liked is they had an award for music educator. It was this guy from Westfield, New York, and he was just insanely productive with his classes: like Celtic music, steel drum, regular choruses and jazz bands. He came out and he just jammed with the Los Lonely Boys and he was great. He was just a super down-to-earth dude. They were saying that the music program at his school is something that 50 percent of the student body sign up for or are in demand for it. So that was kind of inspiring, just to see somebody who is so humble.

The Orion: Who were some of the big names in the music industry that you met when you were in D.C.?

Gibbs: I did a butt graze on Zac Hanson. Met Booker T. Jones, which was really cool. The guy who wrote “Suit & Tie” was in our lobby group.

The Orion: Why is an event like this so important to be involved with?

Gibbs: I think it just really is huge for legislators specifically to be able to see how these issues are impacting creators and are impacting artists and the creative community. When it comes down to it, you’re looking at artists who are not surviving and having to take out like second and third jobs in order to continue to be an artist. And I think it’s really important when you see that to be mindful of that when you’re making legislation. I think it’s really huge to be able to kind of just take over Capital Hill and just show who we are.

Ben-Eishai: I totally agree with James. Doing things like this, just to get the idea out of people’s heads and into the greater consciousness, y’know, just spreading the word is key. If you don’t talk about these things, it’s just ignorant. And I realize that the broadcasters, they’re businesses too, and the families and they have to keep their bottom line to do whatever they have to do, but it’s absurd to think of businesses that are created from music, that survive because of music, not paying fairly for music.