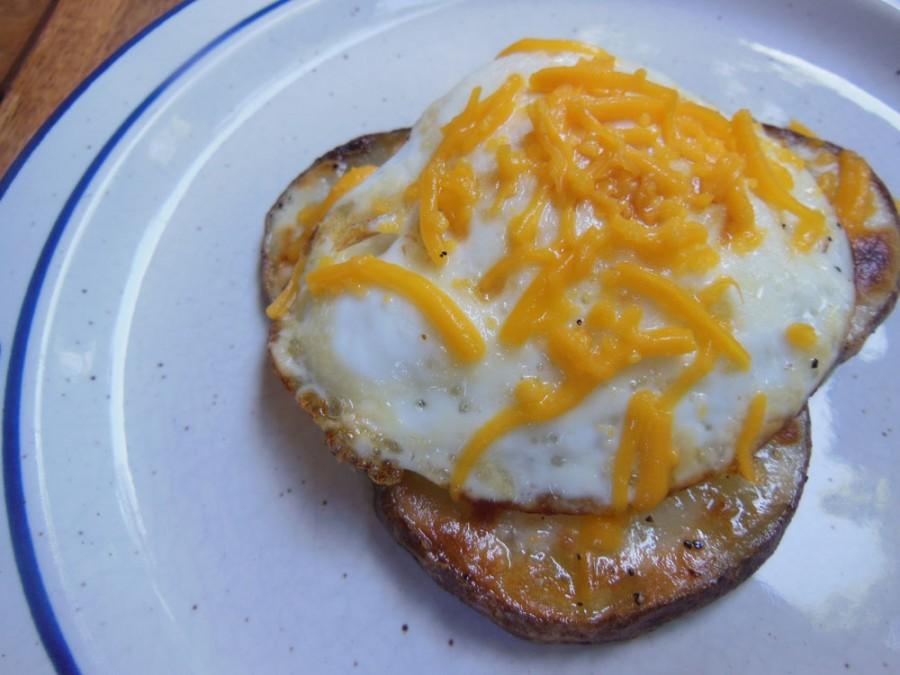 Breakfast is my favorite meal of the day. I was inspired to make a potato and egg sandwich with scrambled eggs and hash browns, but instead of using a muffin for the base of this sandwich, I used a potato and then topped it off with an egg and cheese.Ham, bacon or fresh tomatoes can also be added to this simple breakfast. While most people peel their potatoes, I thoroughly washed my potato and left the skin on. Potato skin contains fiber, potassium and vitamin C. By keeping the skin on the potatoes, you get these nutrients that would have otherwise gone down the drain.Ingredients:1/4 potato1 egg1 tablespoon shredded cheese1 tablespoon olive oilsalt and pepper to tasteTotal Time: 15 minutesYield: 1 breakfast stackWash potato thoroughly, then slice crosswise four times to get three 1/8 inch slices of potato. Spread the potato slices onto a plate and cover with a moist paper towel. Microwave for 5 minutes to partially cook the potatoes. Next, add olive oil to a small pan and fry the potatoes for 5 minutes or until golden brown. In a mini egg frying pan, cook the egg over easy, flipping it over on both sides, but keeping the yolk runny. Add cheese to the top of the egg when it is almost done cooking so it has a chance to melt.Finally, overlap the sliced potatoes on a plate to create a base, then place the fried egg on top. Add salt and pepper to taste.Christina Saschin can be reached at [email protected] or @Stina127 on Twitter.
Delete Image
Align Left
Align Center
Align Right
Align Left
Align Center
Delete Heading