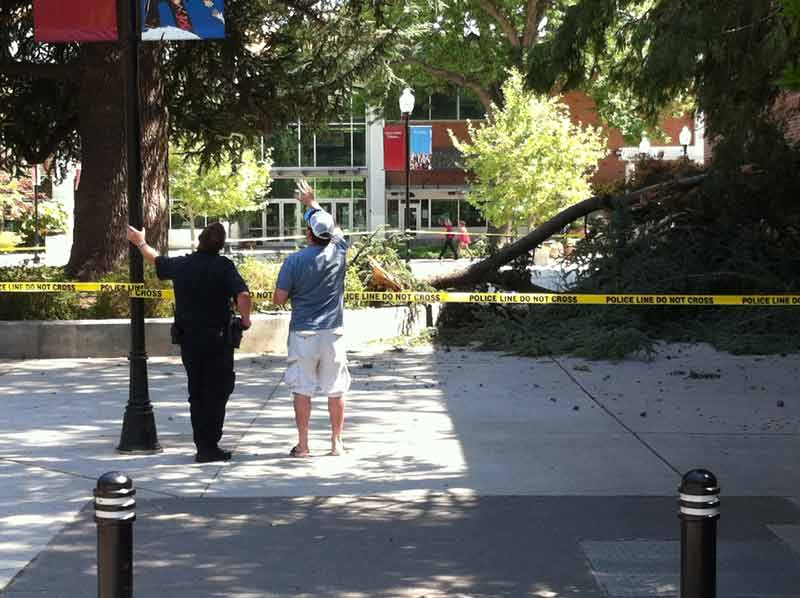 On April 19, a tree branch fell next to Meriam Library, a stark reminder of the hazard these falling limbs pose.

Sudden branch drops are difficult to predict, but they do occur more frequently in Chico during the warmer months, said Durbin Sayers, manager of custodial and moving services and leader of the campus arboretum tours.

Changes in temperature, the angle of the branch and the type of wood increase the likelihood of it falling, said Michael Alonzo, supervisor of grounds and landscape services.

Trees that are most commonly known to have sudden branch drops are deciduous, broadleaf evergreen and conifers, he said. Hundreds of trees on campus fall into those categories.

In preparation for dry conditions, trees take in larger quantities of water, Sayers said. The water is stored it in the tree’s branches, causing them to become heavier.

The limb that struck Lor fell due to an excess amount of water being stored in the tree’s upper branches, said Chico State spokesman Joe Wills.

While the university carries general liability and structural insurance in the event of a branch striking a building, there is no medical or accidental insurance coverage for students or faculty, said Mike Thorpe, director of risk management.

“We do have arborists make assessments of potentially hazardous tree limbs every semester,” Wills said. “We have had to remove trees from campus in the past, but sudden branch drop is a hazard that comes with having so many beautiful trees on our campus.”

Eric McCauley can be reached at [email protected] or @ericdmccauley on Twitter.