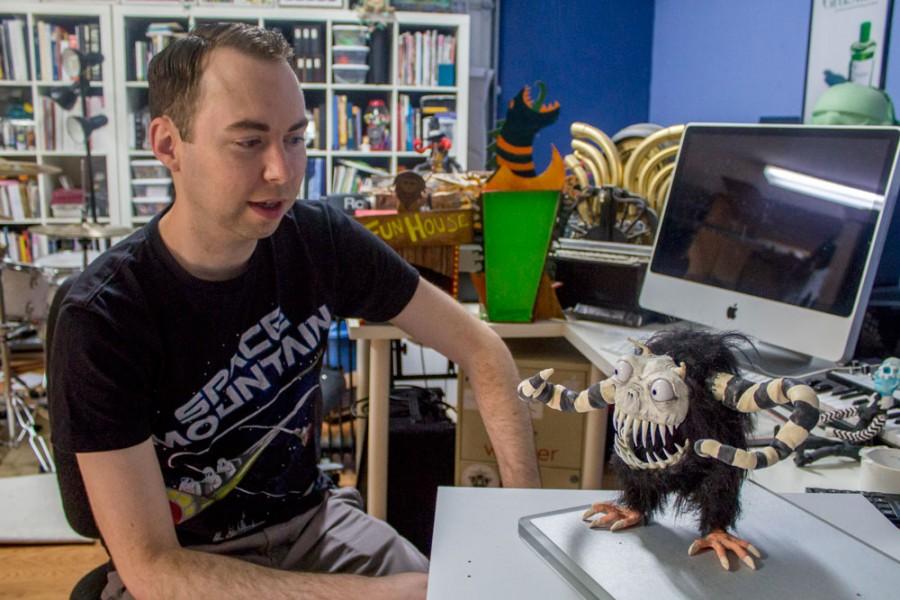 Josh Funk with the star of his next stop motion film, an as-of-now unnamed monster. Photo credit: Ernesto Rivera

But Funk doesn’t use nuts, bolts or a high voltage of electricity like Dr. Frankenstein, nor do his creatures come from a black lagoon. His monsters are made from wires, foam latex, clay and plastic. They come from something much darker than a lagoon — his imagination.

Funk, a Chico State fine arts alumnus, is hard at work developing his next live action, stop-motion film, “The Spaceman.”

“I’ve loved stop motion since I was a kid,” Funk said. “I’ve loved ‘Nightmare Before Christmas,’ and one day I just thought, ‘I wonder how they do that?’”

Funk spent a year making his first stop-motion film, “Wormholes,” a short about “a man being chased by giant worm creatures through different dimensions and locations.”

“The Spaceman” is a

mix of live action, stop-motion animation, set design and “modern technological wizardry.” A man, played by Funk’s brother, travels into space to dispose of a mysterious object and ends up battling an alien monster.

“I’m doing it like the old Ray Harryhausen films where he would have a puppet in the same shot as an actor and then they interact with each other,” Funk said.

The black and white short film is heavily based on Funk’s imagination and is a testament to his childhood.

“I kind of want to get the feeling of when you’re a kid, and you have cardboard and you make a spaceship, and you’re imagination is going wild,” he said. “It’s kind of like being a kid in a way. Building a fort. Building a spaceship in my garage and playing with toys”

It took Funk about a year to get 5 minutes of his 10 to 15 minute short film done.

“I kept on re-working a few things, but now I’m focused and know exactly what needs to be done,” Funk said. “The second half is more time consuming because most of the animation is in the second half.”

Funk’s monsters don’t elicit a mob with pitchforks and torches banging on his door. Instead his mob comes bearing more than $5,000 through the crowd-funding site Kickstarter.

In less than 30 days his Kickstarter project has reached more than 100 percent of its initial goal.

Now, Funk will use the extra cash to build larger scale sets and get more puppet parts. And if the project hits $6,000, he’ll have a private screening in Chico.

“Anything extra that we get will go toward improving the film and taking it to the next level,” he said.

If someone makes a donation of $1,000, their big prize is naming the monster that stars in the film.

Funk commissioned Richard Whillock, a UK-based puppet maker, for the creation of the monster.

“I designed it and drew a few pictures of it and had him made because I really wanted to up the production value,” Funk said.

Funk’s backers have included his friends and family, but he was blown away by the amount of support he got from strangers all over the world.

“They just believed in the film. That’s just a really cool feeling to think that you’re making something that someone can relate to that much that they want to support it,” he said. “It’s surreal.”

All this unexpected Internet support has given Funk a pressure and obligation to make the film really great, he said.

“I just want to make it 10 times better than I expected,” Funk said. “I really want to out-do myself.”