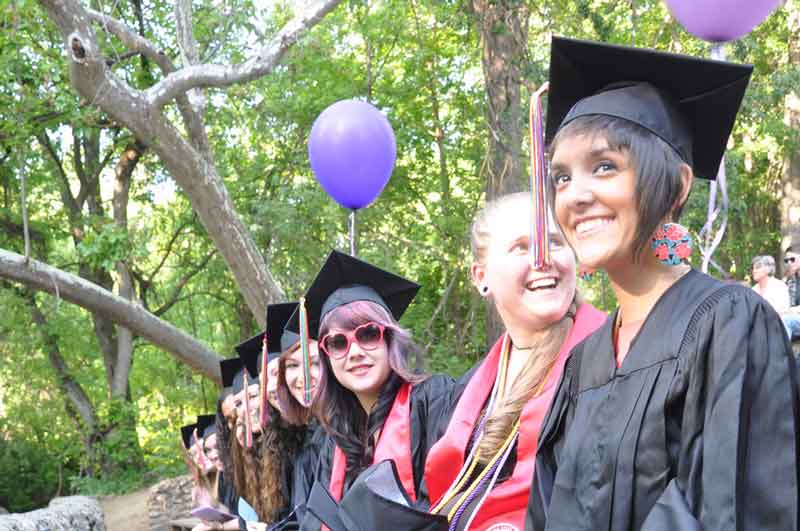 Enrique Raymundo
With commencement looming around the corner, Chico State and local hotels are preparing for the storm that will come with the families of tens of hundreds of graduating students.A controversial ticket policy is new to this year’s commencement ceremony and was set in place to address emergency safety concerns at an over-packed University Stadium, said spokesperson Joe Wills. Each student is allowed free tickets to a maximum of five per student at a first-come-first-served basis, with redistribution options if there are extras available.“We knew that restricting the number of people who could enter the stadium would affect people who would bring a lot of family members,” Wills said.The number of complaints over commencement has gone up since the first announcement, said Director Susan Anderson of the Alumni and Parent Relations office, which has been in charge of commencement proceedings. The complaints have almost all been about the new ticketing policy.Some students have taken to buying and selling tickets, with many tickets going at a range of $75 to $100 and some as low as a single dollar.Anderson said she has posted a warning to craigslist.com saying that tickets can only be used once and if multiple copies of the same ticket are printed out, only the first one will admit its holder to the ceremony. Other posters had similar warnings.”Each ticket has a unique barcode and when the ticket is scanned, it uses that ticket up,” Anderson said. “If someone were to make copies of that ticket to sell, that first ticket use would be used and the rest would be directed to the overflow area at Glenn lawn. So use extreme caution. If you don’t know the person, you don’t know if the ticket is going to work.”While Alumni and Parent Relations has no official stance on the buying and selling of tickets, Anderson said she does not feel that it is right to do. The university currently has a system where unused tickets can be returned to the pool and made available to those who want more.“If people are out there, keeping their tickets and selling them for profit, then those tickets can’t be cycled and redistributed for free to those who need them,” she said.Both ceremonies will be televised and streamed to the overflow area and Performing Arts Center. Saturday’s graduation is currently packed and between 250 to 500 chairs will be set out in the overflow area on either graduation day, according to Alumni and Parent Relations.Sunday’s ceremony has an estimated two hundred unclaimed tickets for the Performing Arts Center viewing area, which she said might be a good option for those who want a climate-controlled viewing experience. The tickets will be redistributed very soon, according to Alumni and Parent Relations.All hotel rooms in time for graduation at the Courtyard Marriott and Residence Inn are reserved with a wait list of over 100 people for cancellations, said hotel sales manager Brook Smith. The ticket issue has not had much of an impact on the reservations, as only one or two cancellations made mention of the ticket scarcity.Smith said the hotel has already received calls about the 2015 graduation, asking for details on ticket policy and room availability for the coming year.“We start taking sales about a year out, because that’s when people start to try to book,” she said.The hotel will open up sales for the Courtyard on July 15 and for the Residence Inn on July 22.Enrique Raymundo can be reached at [email protected] or @ERaymundoCV on Twitter.
Delete Image
Align Left
Align Center
Align Right
Align Left
Align Center
Delete Heading