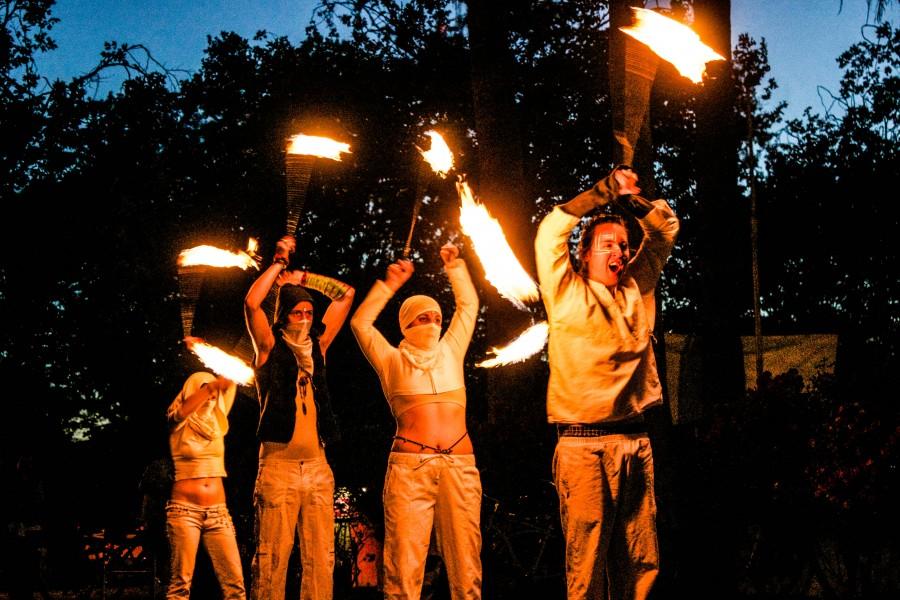 Hosted by the Chico Visual Arts Alliance, the event gave artists an opportunity to share their work with the community.

Lautin-Davis used to own a restaurant downtown called Cory’s, where she would feature local artists’ work. Now, she runs a bed-and-breakfast called Cory’s Country Inn, where each guest room features a different artist.

“My goal is just to share our local arts with Chico,” she said. “What they’ve done here is kind of a dream.”

Ceramic structures with emerging faces welcomed visitors to the event.

Hand-knit and felt wool handbags swayed in the breeze as creator Karen Martin smiled from a booth she shared with three other artists from Koszis Studios.

“We’ve been totally inspired by her,” Martin said.

The studio’s owner, Pat Koszis, has been doing ceramics since 1969 and taught at Butte College for five years.

“I enjoy sharing and working with people,” Koszis said. “I can teach them what I know.”

Ceramic fairy houses teased the imagination with whimsy. A sign over them read “Believe.” It seemed the fairies must have stayed inside their mushroom huts to avoid getting swept away by the windy current.

Maps sparkled under a glass layer.

Jeffrey Obser, an artist cartographer, said he is inspired by Google Earth.

Across from his booth was another artist who utilized technology. A photograph of a polar bear swim printed on wood captured the youthful energy of Chico’s community.

“I took them all on my iPhone,” said the the photographer Jamie Taylor.

Most of his photos were taken within 30 miles of Chico, representing the beauty of where most of the attendees call home.

“It helps to have a local angle,” he said. “But not super specific. I want to make it appealing to everyone.”

Taylor edits his photos using the app Snapseed and has been posting a photo a day on Instagram for the past three years.

He first connected with Chico Visual Arts Alliance in March, he said. The organization got him a show instantly.

“They need that critical mass to help,” Taylor said. “It’s like cross-pollination.”

As the wind died down, the line for a taco truck grew longer and the margaritas began to flow.

From a drawing of Tupac with the wings of an angel to a painting of a hummingbird drinking nectar from a flower, it was clear these students are very talented and utilize a variety of styles. In fact, some of the student’s work had been sold out.

At dusk, the Lumininjas fire danced on the lawn. Dressed in white with painted faces and feathers in their hair, they yelped with excitement.