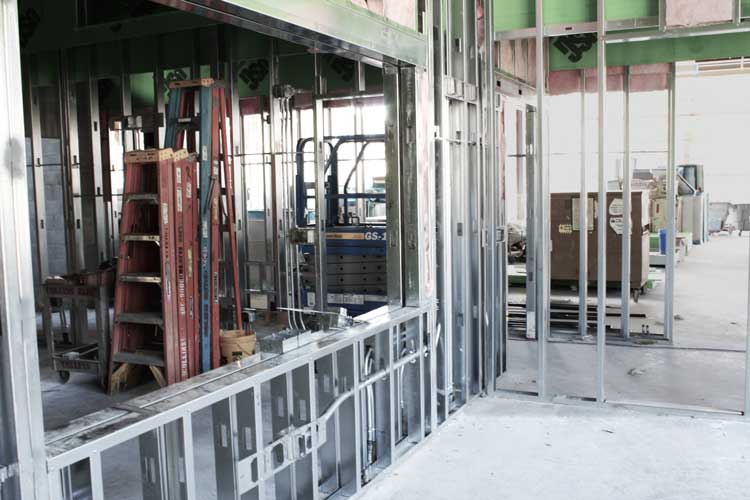 The recording room for the music and theater department will be connected to a recital hall with controllable acoustics. Photo credit: Nnamdi Johnson-Kanu

Under the blistering sun, construction workers in white hard hats and bright yellow vests yelled out directions to each other as students and visitors pass by on their way to campus.

The new arts and humanities building, located next to Laxson Auditorium, is beginning to emerge as construction is slated to finish by 2015.

“What’s happening now is they’re putting interior and exterior walls,” said Sarah Langford, the Chico State Public Affairs coordinator. “The final concrete pour for structural concrete is today and an exterior glass curtain wall will begin at the end of this month.”

The building will cost around $58.4 million and has been in the planning stages since 2010, according to a previous report from The Orion. The 61,000 square feet building will have classrooms, labs, studios and galleries.

Joseph Alexander, dean of the music and theater department, said he is excited with the remaking of Ruth Rowland Taylor Hall.

Students will be able to record and have visual access through video inner connections from the studio to the recital halls, Alexander said.

“A lot of this will enable future potential for the music department,” he said. “It would be an opportunity for students to have access that are in the recording arts program and to a different level of equipment.”

There will be a courtyard in the building where students can hang out and observe glass blowing, sculpture and ceramic works being made, Alexander said.

English professor Tracy Butts said she looks forward to having all the faculty together, where they can have meetings together and not everyone is scattered.

Construction will be complete in 2015 but will be open in 2016, Langford said.

Daisy Dardon can be reached at: news [email protected] or @theorion_news on Twitter.