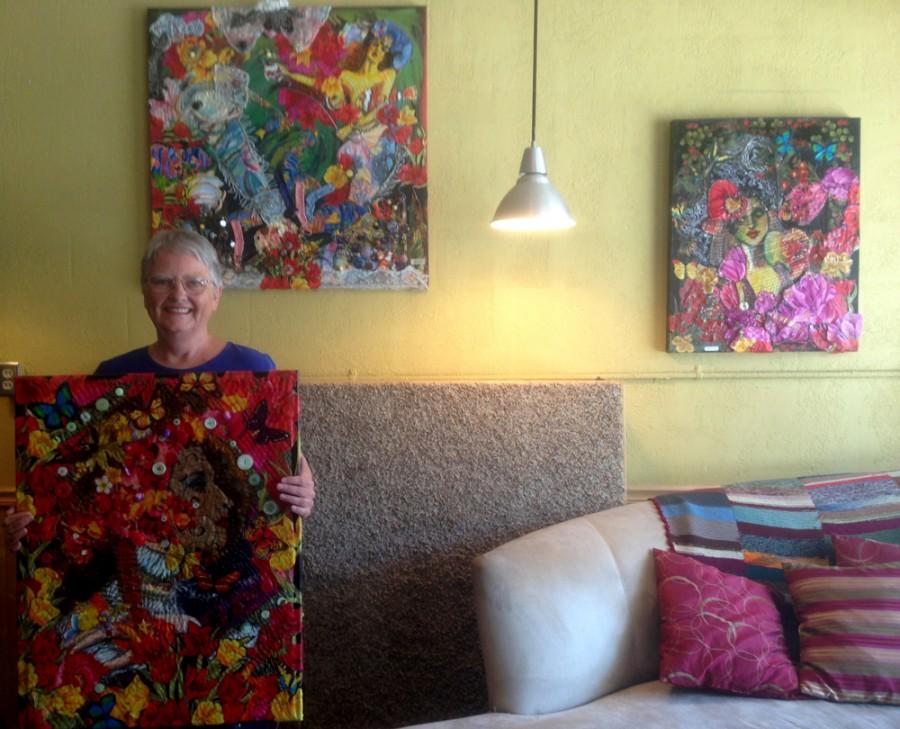 Marie Hubbard, a local artist, remembers drawing faces when she was 3 years old, sketching on the walls whenever she ran out of paper. Now, at 76, it is through art that Hubbard has helped others, by donating proceeds from her pieces and being actively involved in many nonprofit organizations.

“Since I’ve retired I’ve really been prolific in creating art,” said Hubbard. “And my art usually goes to causes I’m interested in, which is domestic violence, and actually food, feeding.”

Hubbard is currently using quilts she’s created to make a 3-D collage collection, of which several pieces are displayed at 100th Monkey Cafe & Books. Proceeds from her pieces will help raise money for the cafe’s new, non-profit pay-as-you-can business model.

“I had these canvases and then started adding layer after layer of acrylic resin,” she said. “This is the technique that gives [the art] a three-dimensional effect.”

Though Hubbard has lived in Chico since 2007, she was born in Laurel, Nebraska. She grew up on a family farm, which was later lost during the Great Depression.

Her first marriage, in which she was physically abused, was one of the biggest influences on her artwork and social activism, Hubbard said.

Hubbard enlisted in the Air Force after graduating high school because she “wanted to see the world,” she said. It was during her basic training in Texas that she met her first husband.

“After we were married, we were stationed in Taiwan,” she said. “We had three boys in three years. It was during that time that the physical abuse started.”

Hubbard channeled her energy into her art to cope, often painting on whatever she could find.

“I would make murals on all the officers’ club [sports] balls,” she said. “It was always about my art, no matter where I was.”

But activism was also an important part of her life.

After the divorce of her first marriage, Hubbard helped orchestrate the establishment of Haven House Services, one of the first women’s domestic shelters in Nebraska, while attending Wayne State College to pursue a degree in psychology. She later received a Point of Light award, which honors individuals and organizations dedicated to community service, for her work at the shelter.

“I actually spent the year after I graduated college putting the program together,” she said. “I pretty much spent 40 hours a week running that program and working with a lot of mentally and physically abused women.”

In the late ’90s and early 2000s, Hubbard’s artwork flourished as she won multiple state championships for pieces like her quilt, “The Quilters.”

When she moved to Chico in 2007, she quickly became part of a Tuesday group at Chico Art Center, which later became like a family to her.

“[The group] sort of became my family,” she said. “It’s through art that I made a life here.”

Hubbard has developed her style with acrylic paint by adding touches of Spanish flair and contrasting colors. One of these pieces will be featured at the Chico Art Center exhibit “Florals and Flowers,” which runs Sept. 19 through 26.

When people ask Hubbard how long it takes to for her to complete a piece of art, she tells them her age and has them subtract the age she started drawing.

“Art is a continual process of learning and adapting,” she said. “When my finger got sore from quilting, I moved on to painting, and when I get tired of painting, I will move on.”

Hubbard through the years