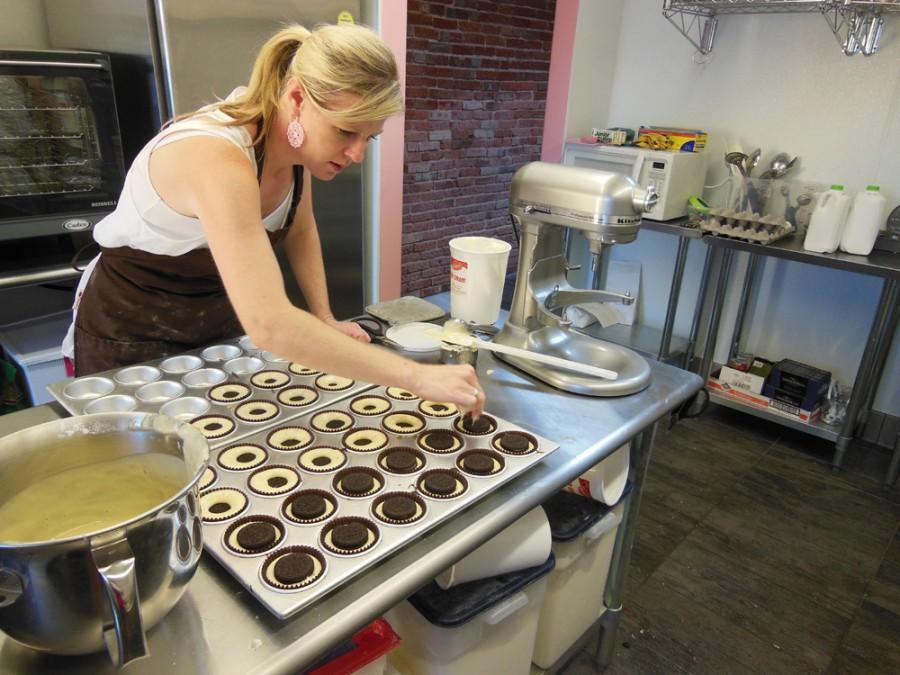 Denine Shern, owner of Denine’s Cupcakes in Chico, pushes whole Oreos into each batter-filled tin before placing her signature cookies and cream cupcakes into the oven. Shern’s cupcakes are baked fresh every morning before the shop opens at 10:30 a.m. and frosted throughout the day.

“Cookies and cream cupcakes are the most popular,” Shern said, “We sell out every day.”

This quaint local shop opened June 3 at 116 Broadway, next to Tres Hombres, offering a new sweet treat for first-year students, transfers or those returning from summer break.

There are currently 12 cupcake flavors in the shop, and all of the recipes are either Shern’s, her mother’s or grandmother’s. Some of the flavors include Shern’s twist on the classics: vanilla, chocolate and carrot.

“All of the cupcakes are made with classic ingredients,” Shern said. “I use flour, butter, sugar and lots of chocolate.”

In 2006, Shern entered the “Great American Cupcake Recipe Challenge” sponsored by “Good Morning America.” She submitted a s’more cupcake recipe and won, appearing on the famous television show with two other finalists.

Shern then got requests from others about trying her cupcakes. After baking cupcakes for birthdays, weddings and various occasions, Shern finally opened up her own store in Chico, her hometown.

Those who are looking for a gluten-free option are in for a treat, as the shop offers gluten-free chocolate cupcakes with chocolate frosting that do not disappoint. They are creamy, moist, and have a good cupcake-to-frosting ratio.

Coffee or milk compliments the cupcakes well and causes each one to melt in your mouth.

Students from elementary school to those in college can order a cupcake and milk for just $4. The cupcakes are individually sold for $3, and little cupcakes can be bought for $1.25.

Each cupcake on display corresponds to a menu above by using an old-fashioned chocolate candy called a Sixlet.

After choosing a cupcake flavor, customers can identify their cupcake by the color of the Sixlet that matches the cupcake’s name. A purple Sixlet marks the cupcake that is the special of the day; this week, the specials are candy bar themed.

Denine’s Cupcakes offers a cute setting as well. There are plenty of tables, top 40 hits play softly in the background and paintings of cupcakes are mounted along the brick interior. The paintings were created by the kindergarten, second and fourth grade classes of Chico Country Day School.

And history buffs should make sure to check out the bathroom, where there is a timeline of the businesses that have occupied 116 Broadway.

“I love how it was first a bake shop,” Shern said.

Though the cupcake craze started a while ago, people still love cupcakes, Shern said.

“I think that people like the individual treat,” she said. “They can eat a cupcake in a sitting.”