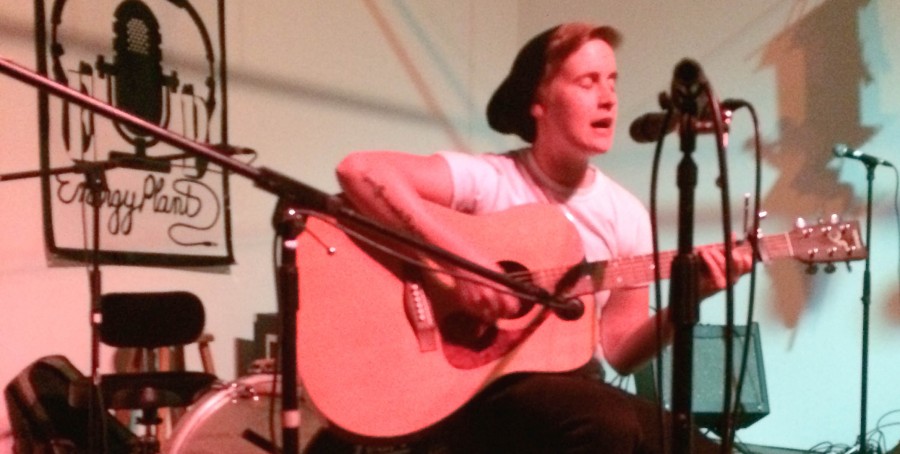 There’s only one place you’d find two rappers, three singer-songwriters and a funky family band performing in the same night.

The benefit was developed by Energy Plant Arts, a community nonprofit recording and multimedia studio that began operating September 2012.

YJ Carson, director of programs and development at Energy Plant Arts, said the studio is hoping to raise $3,600 for three professional recording scholarships to be offered to local talents.

“The EP Recording Scholarship was originally conceived by our organization to create meaningful support for local music by the community, for the community,” Carson said.

Those awarded with the scholarships will record an album of up to 12 songs utilizing the studio’s professional-grade equipment, sound engineers, live recording room and other facilities.

The benefit’s first act and scholarship competitor, Sick Bird, showcased his hip-hop flow while the audience bounced to the rhythm. He performed with confidence as he rapped.

Above & Beyond by Sick Bird

After Jbiz busted out some hard rhymes, Deedee Vest hit the stage with her signature singer-songwriter style. She won the crowd quickly with her raw and lovely vocals that came straight from the heart.

Alex Brown, also a singer-songwriter, quieted the room with intrepid guitar strums and a stirring voice.

Indie folk-rocker Joe Goodwin showed versatility by playing his keyboard, guitar and harmonica. He never opened his eyes, but his original songs sent out a warm, pleasant, personal connectivity that isn’t often distributed so freely.

The show’s closer was Sofa King, a family band with the look and sound of a party-funk band, that riled up the audience with their antics.

Learn how to put a song on itunes at ReverbNation.com

Energy Plant Arts will create a sign-up list for local solo artists and bands to compete for votes from the community once the fundraising goal is raised. The band and artists with the most votes will receive a scholarship and begin working with the studio to record and mix an album.

“This Energy Plant recording scholarship is the pilot and first scholarship to be offered by our organization,” Carson said. “The turnout was much better than I could have hoped for. I’m really happy that people came out for a good cause.”

So far, Energy Plant Arts has raised $805 out of its $3,600 goal. Those interested in contributing to the scholarship can attend benefit shows or donate online.

Jeffrey Fox can be reached at [email protected] at @FoxyJeff on Twitter.