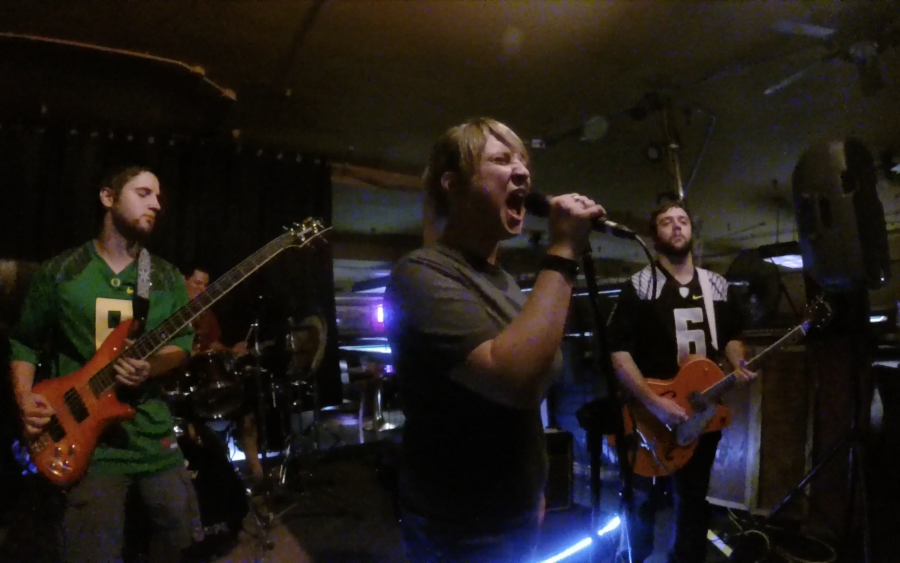 A monkey-masked woman belly danced against the stage, a singer leaped from a kick drum and the audience cried with delight as three bands proved that rock ‘n’ roll still exists in its rawest form on Saturday at The DownLo.

The show, originally called “Replace the Bass,” was intended to raise money for headliner and local band Wanderers & Wolves to replace a bass guitar presumably stolen about a month ago. Luckily, the bass was recovered at The Maltese, where the band had performed previously.

Christian Crandall, Wanderers & Wolves’ guitarist, explained that the elusiveness of a bass guitar was nothing new.

“The bass guitar is kind of like the redheaded step child of the band,” he said. “We never seemed to be able to get a hold of one. And when we finally did, it was gone.”

After the bass was recovered, the band collectively decided to turn the event into a benefit show with proceeds going to The Jesus Center, which provides beneficial services to the homeless population in Chico.

“All three of us are really into what The Jesus Center does,” Crandall added. “We believe in that, so we thought that was the best place to send the money off to.”

Wanderers & Wolves asked Chico’s Bull Moose Party and Red Bluff’s BandMaster Ruckus to perform with them at the event as a thank you for letting them borrow equipment when the bass was missing.

The three bands worked together to create an atmosphere of invigorating rawness for the show.

“I’ve never seen anything like it,” said concert-goer James Johnson. “It’s like old school and new school rock all mixed in there.”

Bull Moose Party’s lead singer Mallory Penzotti screamed her heart out and had a sound reminiscent of Grace Slick of Jefferson Airplane and Ann Wilson of Heart. The band played its instruments intensely: the energy coming from each member could be felt.

Though the energy from Bull Moose Party was hard to match, BandMaster Ruckus followed through once they came onto the stage. The band set a monkey mask on its large amp and with three clicks of the drum sticks they threw forward a beautiful force of sound that is rarely heard.

The band started with powerful blues rock vibes and moved into strong funk-rock grooves for an electrifying, foot-stomping performance.

Wanderers & Wolves then closed the show with a sound representative of its many inspirations, including Led Zeppelin, The Black Keys, Jack White and AC/DC.

The show had enough energy to pump up even veteran concert-goers, making it a night that will not soon be forgotten.