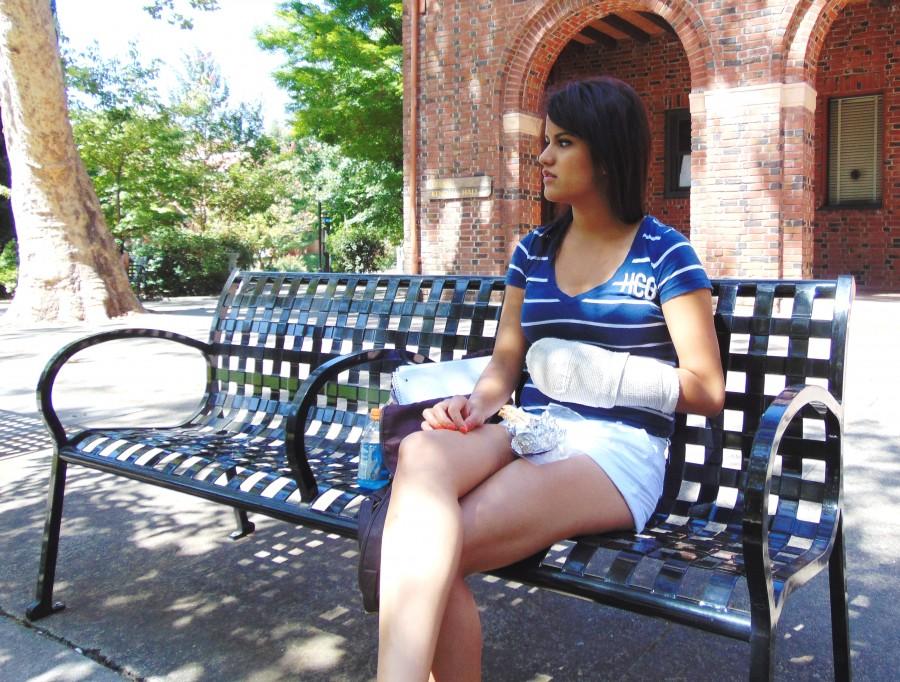 Q: What has been your greatest challenge since transferring here?

A: “I think just looking for my classes to be honest. And some of the classes are getting harder. And since I have this (cast), it’s hard for me to get around. And also I hardly know anyone here so it’s hard to adapt myself to this new environment, but I love it. My biggest surprise has been that everyone is really nice here. Back home no one would talk to you or no one would help you, to be honest, and here everyone is so friendly and they are always willing to help you.” – Alexia Carrillo, third-year speech pathology major

Q: What will you miss most about home?

A: “The beach. I lived five minutes away, so not being able to get there in two seconds is pretty frustrating and not going at all is even more annoying. That’s something I’ll miss. I also come from a big family, so being alone is not something that I’ve done a lot because there was always people around. Adjusting to that has been pretty different, but I’m getting there.” – Joseph Quillin, first-year undeclared

Q: What is one of your saddest memories?

A: “My friend told me about an experience that she had with a guy…(people) talk about rape culture but then realizing that it’s true and it’s everywhere and it’s something that happens in college that people try to not think about. We have to speak out about it. Basically things like that happen and while they’re not pretty, we have to talk about it. Be more open about things that aren’t the best so we don’t go around pretending to live out lives that aren’t really real.” – Yvette Rivera, third-year psychology major

Q: What has been one of your greatest challenges?

A: “I came up in a different academic environment than the one here, where people were a little bit more furiously dedicated to their studies than has been the case and where people were less concerned with socializing and having fun. There was a sort of masochistic attitude toward your studies. You want to study until it hurts and then keep going. That’s not generally the ethos of this institution and so trying to reconcile my own academic experiences with the expectations of the students has been challenging. But I think this has been a healthier environment for many people and that’s okay.” – Brian Brazeal, associate anthropology professor

Samantha McKibben can be reached at [email protected] or @sammiemckay.