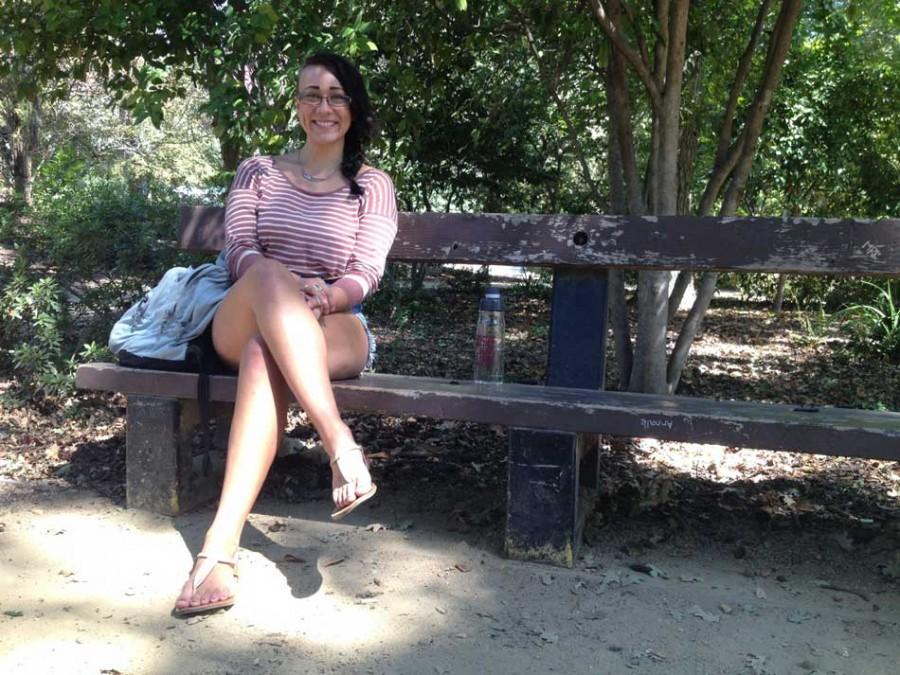 Ashley Carlton, a fifth-year student double majoring in psychology and exercise physiology, said she is accustomed to men seeing her as an object instead of a human being. Photo credit: Madison Holmes

“To be honest, I have catcalled women,” said Brandon Lee, a second-year business major. “It’s almost like a man’s second nature; an uncontrollable feeling of hormones gets bestowed upon you.”

Some faculty and students believe that acts of misogyny, or hatred of women, is a common occurrence on campus.

Examples of misogyny can be seen through the use of sexist language like calling someone a “bitch,” “slut” or “whore,” through slut-shaming, catcalling and violence against women, said Sarah Sullivan, the director of the Gender & Sexuality Equity Center.

Miley Hook, a first-year psychology major, was running in Oroville when a man slowly pulled his car up beside her.

“I started running even faster towards my friend to get away from him,” Hook said. “He said, ‘Sorry, I didn’t mean to scare you,’ but he did.”

Lee said he sympathizes with both sides.

“When I see it happen I feel disgusted, but I know at the same time he can’t control himself,” he said.

The argument that men cannot help objectifying women because it is a part of their human nature is ridiculous, Sullivan said.

“That’s foreign to me – that an adult or even a teenager, somebody who is not in diapers, can’t control the way he stares or what he says – and that’s unfortunate,” said Nandi Crosby, a sociology professor.

It is the responsibility of other men to speak up when this happens, Crosby said.

Trevor Fong, a third-year nutrition and food sciences major, has seen women being objectified and has not stopped it because he does not like to get into other people’s business.

“I think it’s wrong though, and I don’t like it when I see it happening,” he said. “I’m sure it would feel terrible to be objectified. No human should be treated that way.”

What women choose to wear has been used as an excuse for why men objectify women, Crosby said.

“The fact that we are focused on the symbols of hate and by symbols, I mean her clothes or how she might be sitting, is troubling to me,” she said.

But some women think that women who go downtown during the weekend have to be careful about what they wear because it determines whether or not they will be harassed, said Ashley Carlton, a fifth-year student double majoring in psychology and exercise physiology.

However, revealing clothing does not mean that women are interested, Crosby said.

“It could be that she has in her mind who she might be interested in attracting, and it ain’t you or somebody who looks like you and it certainly would not be somebody who would say, ‘Hey baby, damn I like that,’” she said. “It’s definitely not that person.”

Men no longer care about women or what the root of womanhood is, Carlton said. Many men have preconceived expectations of what women want and there are no longer root causes of attraction, it’s all superficial now.

“Lots of guys think it’s okay to come up to you at a club and touch you just because we’re in close quarters and it’s not a big deal anymore because we’re so used to it now,” Carlton said. “Men see women as objects to fondle instead of respected human beings.”

To stop or prevent misogyny, society needs to build a community where women are valued as human beings, Sullivan said.

“We need our self-respect back,” Carlton said. “We are not just here for the pleasure of men.”