People place too much value in possessions 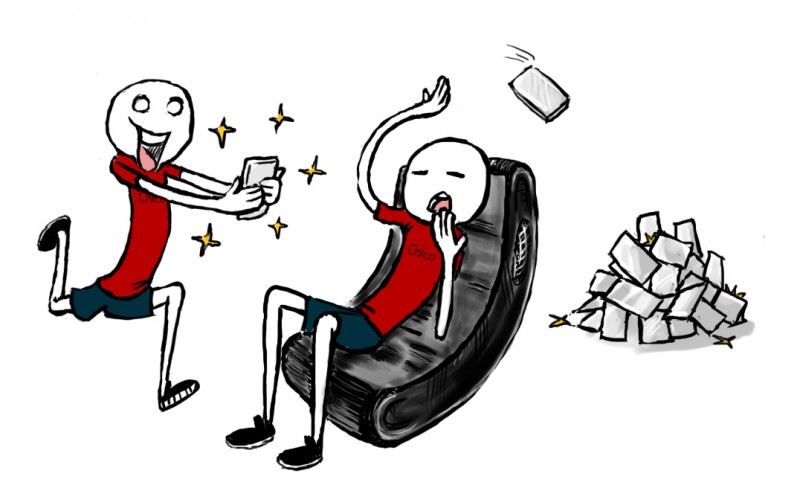 I have to get the new iPhone.

I don’t technically need to get it. My current iPhone is less than a year old and still functions perfectly. There is no logical reason for me to get a new phone.

Yet here I am, feeling convinced that my quality of life will be vastly improved if I have a new phone.

It’s how I’ve been conditioned. We live in a society of hierarchies. We’re ranked based on a given number of categories. Sometimes that’s income. Almost as often it’s the amount of “stuff” we have.

Kids have to have the latest video games to be cool, adults line up outside of Apple stores for each new gadget and I’m sure Rascal scooters get updated every now and then for old people.

As much as always purchasing new material things contributes to an unhealthy ranking system among us humans, it plays into the instant gratification culture the Internet has helped foster as well. “Retail therapy” might as well be in the Pledge of Allegiance.

Most of the time, when I buy something I’ve always wanted but ultimately don’t need, like something technology related, I find it fairly unfulfilling.

The initial novelty and excitement wears off quickly and it’s just another “thing.”

As coincidence would have it, there’s some evidence to support this.

Yes, material possessions do improve people’s quality of life – for a time. After a person or household reaches a certain level of economic development though, added material gains don’t have much of an effect on happiness.

So, why do we still do it? I can answer that the same way I can deduce why I get a craving for Dominos every Friday: it’s a habit.

It’s something we’ve always done and now it’s considered normal. Getting new stuff is fun. It will always feel like mini-Christmas when I see a package sitting in front of my door.

But there’s a line. Once the acquisition of material things becomes solely responsible for a person’s happiness, there is a problem.

Matt Murphy can be reached at [email protected] or @mattymurph93 on Twitter.