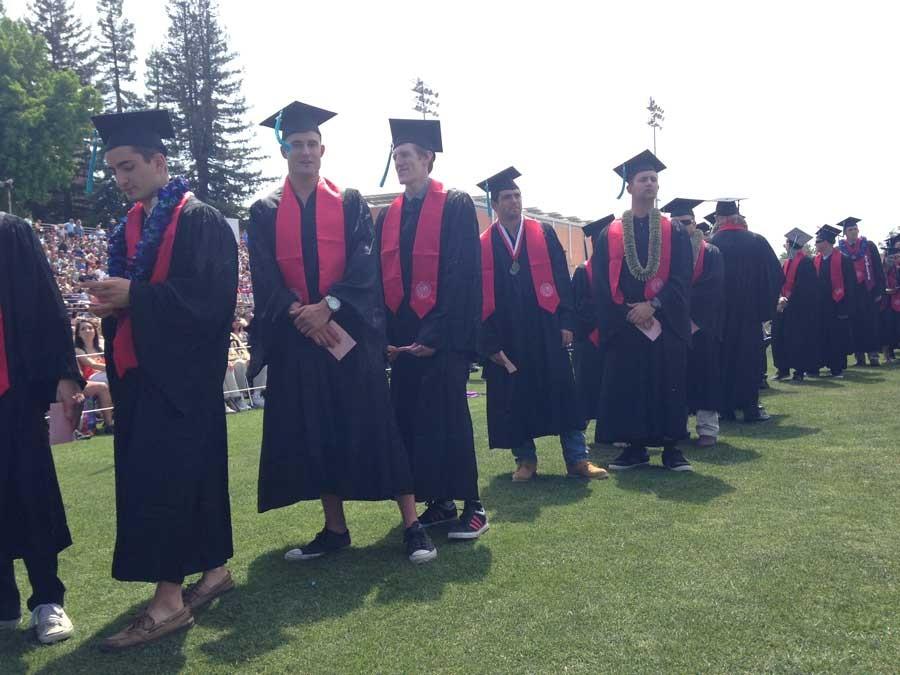 Chico State graduate class of 2014 wait in line to walk the stage at the University Stadium in May. Photo credit: Christine Lee

Commencement ceremonies will now take place throughout a three day extended period for next year’s graduation.

Graduation will be held Friday, May 15, 2015 through Sunday, May 17, 2015, wrote Susan Anderson, director of Alumni and Parent Relations, in an email to The Orion. The colleges will be split up between each days.

The commencement held in May of this year had two ceremonies at the University Stadium and one at Laxson Auditorium for the College of Agriculture. Two ceremonies were held Saturday morning and one on Sunday.

Initially, students gave negative feedback about this year’s commencement because only five tickets were available for each student, Anderson wrote. Students who didn’t use their five tickets turned them in so others were able to use them.

With the new changes, each student will receive eight tickets for guests.

There were approximately 2,990 students and 16,000 guests at the undergraduate ceremonies last spring, Anderson said.

“We had greatly reduced the size of the crowd from previous years – there were no major safety issues,” she said. “For the first time in years, we could have easily gotten emergency vehicles around the track if needed.”

In previous years, families would sit in the stands intoxicated after partaking in the Riley’s drinking tradition for graduates, said Ryan Patten, chair of the Political Science department, who sat on the commencement committee last year. People were fighting in the stands and there were concerns about the ceremony’s accessibility to the handicapped, he said.

This year, the College of Agriculture graduates and masters students will have their ceremony on the same day as The Colleges of Behavioral and Social Sciences, Engineering, Computer Science and Construction Management on Friday, May 15, 2015.

Jovanna Garcia can be reached at [email protected] or Jo_Garcia19 on Twitter.