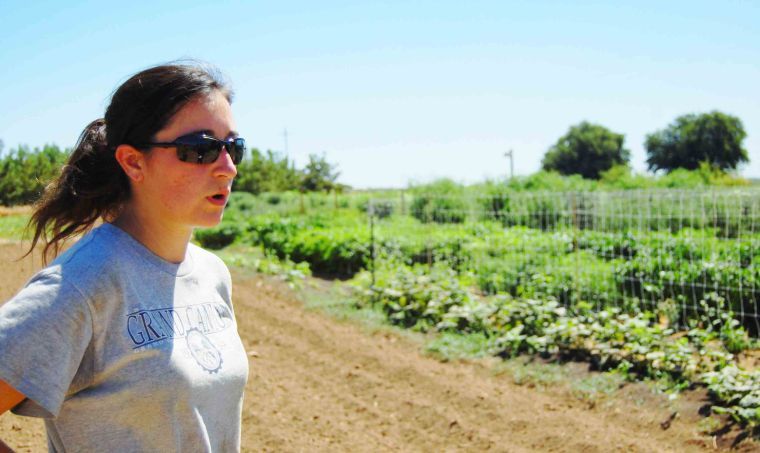 Nicholas Carr Crissy Geiger volunteers in the University Farm’s organic garden. Many of the crops produced here will make their way into the menu served by A.S. Dining Services and University Housing.

These are just a few of the programs that Chico State engages in while traveling the long path to a sustainable campus.

For the second year in a row, Chico State was recognized Aug. 5 on The Princeton Review’s Green Honor Roll as one of 22 schools that received the highest score possible.

In 2006, Chico State students established the funding for the Associated Students Sustainability Program with a $5 fee. Aside from their campus operations, the organization provides up to $60,000 for student-run sustainability projects through the Student Fund Allocation Committee.

The Associated Students Dining Program is also working toward achieving a goal of zero-waste by 2015, a benchmark that’s defined as having a 90 percent or greater diversion rate, with only 10 percent of material being sent to a landfill.

“We did a waste characterization of all our dining areas last semester and we were at just above 80 percent,” Goodsell said.

The Wildcat Store managed to decrease the number of plastic bags it gives out by about 10,000 last year. A five-cent token that shoppers could give to local charities provided students an incentive to leave without a bag, Goodsell said.

The WREC already has energy and water saving technologies since it is a Leadership in Energy and Environmental Design, or LEED, building, he said. Composting in the break rooms has further reduced the building’s waste.

“They have on average about 28 pounds of material — of trash, that comes out of that building everyday — which is nothing for the amount of people that go in there,” Goodsell said.

Associated Students Recycling, founded by students in 1996, operates independently of the university with its own full-time coordinator and offers about 20 jobs to students who pick up paper, cans, bottles and many other recyclables around campus.

The recycling program collected over 610,000 pounds of material since last August and are composting three times the amount that it was five years ago, Goodsell said.

The Institute for Sustainable Development was established in 2007 and focuses on campuswide initiatives and practices to improve sustainability, said Dr. James Pushnik, the program’s director. The institute’s efforts focus on transportation alternatives, student housing and waste management.

The institute is in charge of coordinating Zipcar, a car-sharing program where students, faculty and staff can reserve a car by the hour with gas and insurance included, said Fletcher Alexander, the campus sustainability coordinator.

Zimride is a social media website that acts as an online ride-sharing platform where students can create a profile and link to people in similar communities.

“You can say ‘me and a buddy are going to Tahoe this weekend. We’re leaving Friday evening and coming back Sunday night. We have two extra seats. We’d like $20 gas money. We like to listen to Led Zeppelin,’ ” Alexander said.

The students were taught about energy reduction and could track their readings online. In the battle between residence halls, Shasta came out on top with a 13.5 percent reduction followed by Lassen with 12.5, according to Alexander.

“That’s only based on behavior change,” Alexander said. “They weren’t able to make changes to the buildings or the way they were operating.”

In addition to competing with each other, the students also competed as a campus against 10 California universities. Chico State came out on top with the highest reduction.

“The idea was to show them that they can reduce it without impacts in the quality of their life,” Pushnik said.

Diversion Excursion is another program aimed at waste management that also focuses on the residence halls. It takes place during finals week and seeks to divert the waste that results when 2,000 students leave the residence halls, Alexander said.

Both recyclables and reusable items are collected during the program, and items like clothes, office supplies and electronics are given to local charities. There have been around 20,000 pounds of materials diverted from landfills, Alexander said.

Looking forward into the semester, Pushkin and Alexander point to Campus Sustainability Day, which will take place on Oct. 23. There will be a sustainability open house in the Bell Memorial Union and a campus sustainability planning workshop where students, staff and faculty can provide feedback and project ideas to move the university move toward sustainability goals.

At about the same time, the university will receive its ratings from the Sustainability Tracking, Assessment and Rating System, known as STARS. The rating system is a comprehensive reporting framework that touches every part of the campus. The rankings are administered by The Association for the Advancement of Sustainability in Higher Education. Chico State was a charter participant in the rollout of the program in 2008.

The rankings in the system are platinum, gold, silver and bronze. Chico State ranked silver in last year’s ratings, which means it received a score of 45 or higher. To achieve a gold rating the score must be 65 or higher.

Mark Stemen a professor in the geography and planning department, said that the university is misrepresenting its level of accomplishment in sustainability by highlighting the Green Honor Roll over the other rating system.

“I challenge my university’s academic integrity,” Stemen wrote in an email to The Orion. “When presented with a report that contradicted their own internal research, they promoted what made them look good, and buried the truth.”

Stemen said that the campus sustainability efforts peaked in 2008 and that the university has been going downhill since. While he does not argue that Chico State is doing good work on sustainability, he feels it should not overstate its achievements.

“Let’s be clear about this,” Stemen wrote. “The university is doing good things — silver is something you should be proud of. That’s a B+. What’s wrong with a B+? But they’re calling themselves A students. That’s lying.”

Pushnik is proud of the university’s achievements, but admitted that the work is never done.

Alexander credits the close-knit, residential nature of Chico State, which differs from most campuses in the California State University system.

“I think we are at an interesting point right now, where sustainability has certainly become part of the culture on this campus,” Alexander said. “People are really tied to this campus. I think we benefit from that in terms of the amount of people who feel a strong, vested interest in sustainability on the campus.”