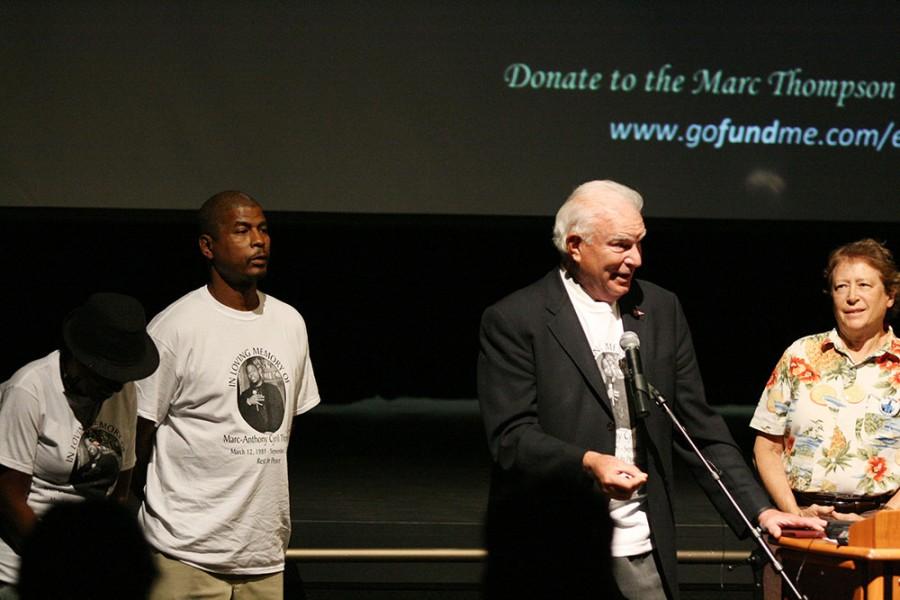 Friends and family of Marc Thompson wore shirts with his photo printed on the front with his favorite quote, “Be the change you want to see in the world” printed on the back for his memorial Tuesday night.

His funeral was held Monday afternoon at Chico’s Seventh Day Adventist Church and his burial site was in Oroville.

Thompson was remembered by his friends and family as an unapologetic, honest and funny person who fought and believed in social equality.

President Paul Zingg and sociology professor Kathleen Kaiser presented Thompson’s parents with his diploma. Thompson graduating college is a feat that deserves to be acknowledged regardless of his passing, Zingg said.

“We’ve had many, many conversations and most of those would end with me telling him ‘We need you to come here, we need you at Chico State, we need you to touch our students and this campus in the way that you have touched every person you have met,’ and he did,” Zingg said.

Thompson attended Butte college before transferring to at Chico State. Several professors from both campuses attended his memorial.

“There are so many words that can describe Marc,” Zingg said. “Bold, confident, passionate, but this is what I liked the most- he always told the truth.”

“He always just said what needed to be said,” said Will Amado Syldor Severino, a friend of Thompson. “Regardless of the friends he would lose or the consequences he would face, he just said it.”

A clip was shown from the film “If These Halls Could Talk” where Thompson was featured discussing racism in America.

He was a passionate person who dedicated his short life to fighting for equality, said Lee Mun Wah, Thompson’s friend and director of the film.

“No parent should have to outlive their children,” Mun Wah said. “Marc was a good, honest man.”

The film will be sold and its profits will go toward a Chico State memorial scholarship in Thompson’s name.

“Marc fought for gay rights, animal rights and everything.” said Alfred Jones, Thompson’s friend. “You name a social movement where there is some injustice, Marc had some hand in it, I promise you that.”

Thompson was a feminist, a social activist and everything in between, Jones said.

“Marc was the one who said ‘Al, you can not walk around campus and look at women the way you do’,” Jones said. “Marc was one of those people who let me know that it’s not just about race, you have to push for everything at the same time.”

Mun Wah read a poem he wrote in memory of Thompson to conclude the memorial.

Madison Holmes can be reached at: [email protected] or @madisonholmes95 on Twitter.