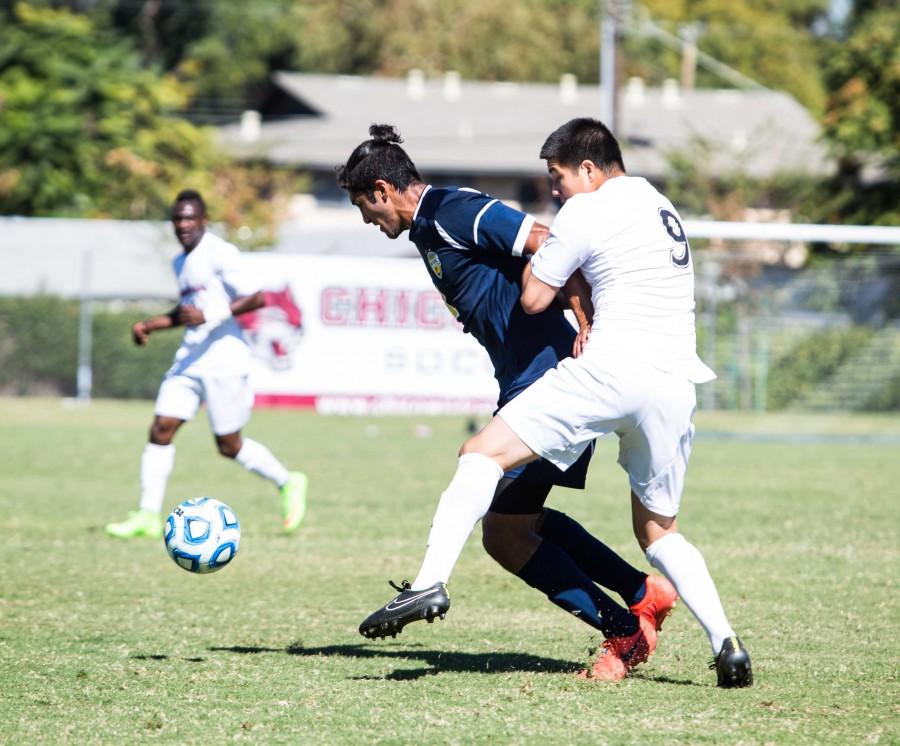 Octavio Murillo grapples with the opposition as both players go for the ball. Photo credit: Emily Teague

The Chico State men’s soccer squad snapped a four-game losing streak by earning a hard-fought win in overtime against the Humboldt State Lumberjacks on Friday.

The game started slow as the first half only had three shots apiece from both teams. The second shot of the game was headed for a goal by junior Matt Hurlow off a nice assist from junior Sean Gallagher just before the 20 minute mark in the game.

The Lumberjacks fought back to get a goal at the 59th minute of the game. After Humboldt State scored, it was a stalemate between the California Collegiate Athletic Association [CCAA] teams with many chances on goal but nothing crossing the net.

The game ended at regulation as a tie, so the teams went to overtime. Just as overtime started, Chico State went on attack and the Humboldt State goalie came up and got in a collision with senior Akwefei Ajekwa.

This collision led to the Lumberjacks goalie getting a red card and being ejected as well as a penalty shot being awarded to Chico State. Hurlow stepped up for the penalty and made the shot to win the game 2-1.

Freshman goalie Luke Dennison finished the game with six saves. The Wildcats move to 6-4-1 on the season and improve to 1-4 in conference play.