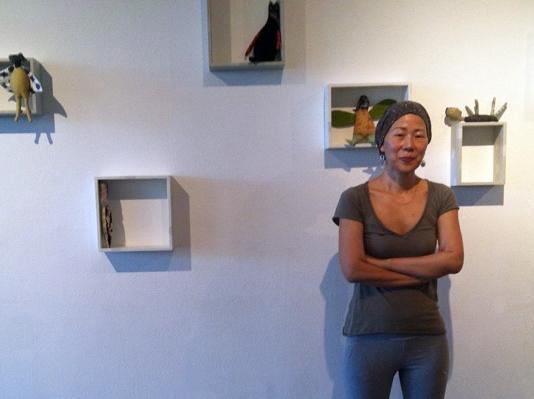 Eunkang Koh stands in front of her "hybrid creatures" at 1078 Gallery. Her exhibit, "Humanity Bites," will be on display until Nov. 1. Photo credit: Emma Wood-Wright

Contemporary artist Eunkang Koh spent the last year exploring eight countries with only a suitcase and a backpack.

Koh was on sabbatical from her printmaking and drawing teaching position at the University of Nevada, Reno. Now her exhibit “Humanity Bites,” which features fabric creatures, prints, drawings, paintings and ceramics, is on display at 1078 Gallery until Nov. 1.

“When looking at my cat, she doesn’t need much,” Koh said. “But humans, we are such consuming animals.”

Koh moved to the United States from Korea in 2002 as a graduate student. Her work explores humans as social animals in a consumerist society through various techniques such as printmaking, drawing, painting, ceramics and most recently, sewing.

Koh grew up in a Buddhist household. Buddhism is a religion that includes the idea of reincarnation, the concept that after death, the soul or spirit begins life in a new body, often an animal.

“My grandma would tell me all these stories about this person who didn’t do well, or whatever, and he became reincarnated as a cow and had to work his ass off all his life,” she said.

Although she never took it literally, that concept has influenced her art, Koh said. A theme throughout Koh’s artwork is combining human and animal features to represent the animalistic tendencies of people.

“We are animals, and some of us have personalities more like cats or dogs or pigs or snakes,” she said.

Koh said her work also exposes the consumerist side of many humans.

“Like one of those days you walk into your closet, it’s full of shit and you have nothing to wear,” she said. “At one point I felt really disgusted by it. Like, ‘Why don’t I have anything to wear when I have all this stuff?’”

From 2002 to 2006, Koh attended Long Beach State, where she earned her master of fine arts in studio art. That is where she met her cat, Lola Pumpkin Muffin.

“She was my roommate’s cat in Long Beach, but she adopted me,” Koh said. “She decided, ‘I’m going to live with you.’ So I was chosen by my cat.”

In 2006, Koh moved to Reno, Nevada, where she began teaching printmaking and drawing at the University of Nevada, Reno.

“I went from New York to LA, so coming to Reno was hard for me, very different,” she said. “But now I love it. It’s very beautiful.”

Starting the summer of 2013, Koh took a sabbatical from her teaching job and traveled to Spain, Italy, Macao, Hong Kong, mainland China, Cambodia, India and back to her homeland, Korea.

Traveling with the bare necessities, she couldn’t expect to have things she would normally be able to access, Koh said.

“So that gives you kind of a limitation,” she said. “But then once you have that limitation, something else is opening up for you, and that is what I was going through.”

She had brought some carving tools and two pieces of linoleum with her, just in case she wasn’t able to find any materials.

“I could go and get some paper, but then I am so fascinated with all this fabric I could get,” Koh said.

With colorful fabric from India and Korea, Koh began creating “hybrid creatures.” These combined fabrics were made into a unique design by Koh using the linocut technique and industry-printed commercial fabric.

“I wanted to push farther, I just didn’t know how or where to go until that point when I felt limited with resources,” she said. 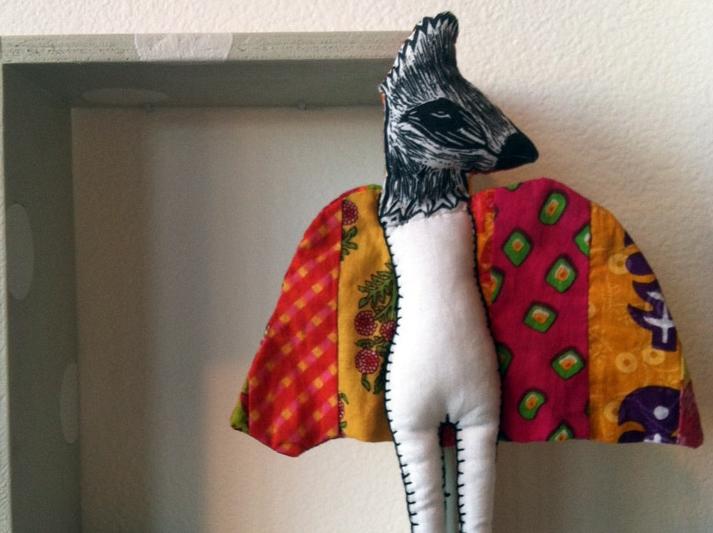 Due to a limited amount of carrying space, Koh created about 15 of these creatures while she was abroad. She continued to make them when she returned from her travels this summer.

“For the last two months I’ve just been pumping out all this work,” she said. “I’ve made about 50.”

Several of these creatures, along with other pieces Koh created through various artistic techniques and materials, will be featured in her exhibit.