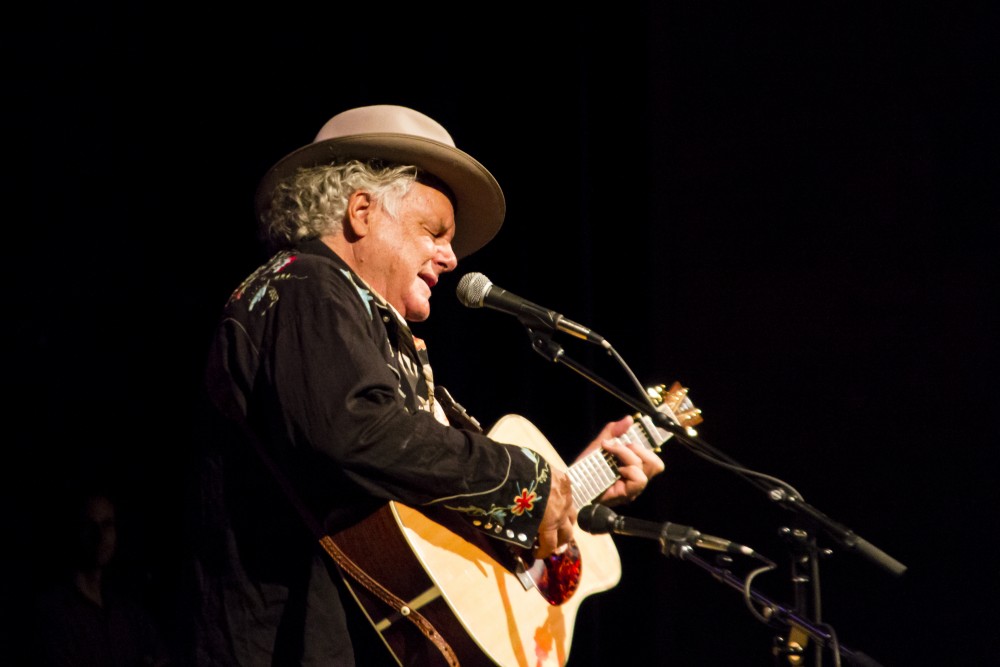 Peter Rowan slowly walked onstage to his spotlight with only one friend — his Martin acoustic guitar. After the applause faded Rowan looked up from under his hat, adjusted his country-western blazer and struck his first chord.

Rowan began his two-hour set at the Laxon Auditorium Thursday evening with an intimate performance that immediately captivated the audience. He played six songs unaccompanied that were filled with themes of love, heartbreak and loneliness that only seemed to fuel the 71-year-old Grammy-award winner.

Rowan’s polyrhythmic guitar playing and soulful singing was a somber look into the singer-songwriter’s personal tragedies that clearly still resonates with him. His folk introduction to a night of twang and bluegrass was delivered perfectly with his gospel, southern voice and his rhythm and blues guitar style.

One-by-one Rowan invited his band mates onto the stage to transform his performance from an intimate folk show into a foot-stomping performance of bluegrass and honky-tonk country.

While Rowan was clearly the star of the show, he incorporated long musical interludes in his classic bluegrass hits, a trick he learned from his collaboration with Jerry Garcia of The Grateful Dead, to highlight his honky-tonk bandmates and allow them to shine on stage.

Nina Gerber ripped up and down her Fender Stratocaster with blues riffs that would have made Chuck Berry stop and stare.

Rowan’s guitar chops were the perfect partner to his powerful voice and lyrics. His deconstructed and improvised chord progressions and riffs sounded so fluid that one would be surprised hearing how different it was from its original recording.

Even though Rowan’s career has spanned five decades, he remains deeply rooted in his influence of country and blues that practically transformed Laxon Auditorium into 1960s Nashville, Tenn.

Songs like “Free Mexican Airforce” and “In The Land of the Navajo” showed the audience that Rowan’s songwriting was as eclectic as his singing, introducing country-western political themes of border and land issues that would move even the most conservative.

After the five-piece band left the stage and a standing ovation that demanded an encore, Rowan returned to the stage, again, with only one friend, the same Martin guitar who walked with him onstage at the beginning of the night. He ended his night of bluegrass and honky tonk the same way he began it, with an intimate folk number but this time he had invited a different band to back him up — the audience. Rowan led the entire audience at the Laxon Auditorium through a sing-a-long for his ballad “Everybody’s Gotta Song To Sing.”

This bluegrass boy’s ballad was the perfect ending to a career-spanning set that felt like a reflection of the singer-songwriter’s five decades of performing.

Throughout his career, Rowan has hundreds of songs to sing, and that night, the entire audience did too.
Ernesto Rivera can be reached at [email protected] or @ernestorivera on Twitter.