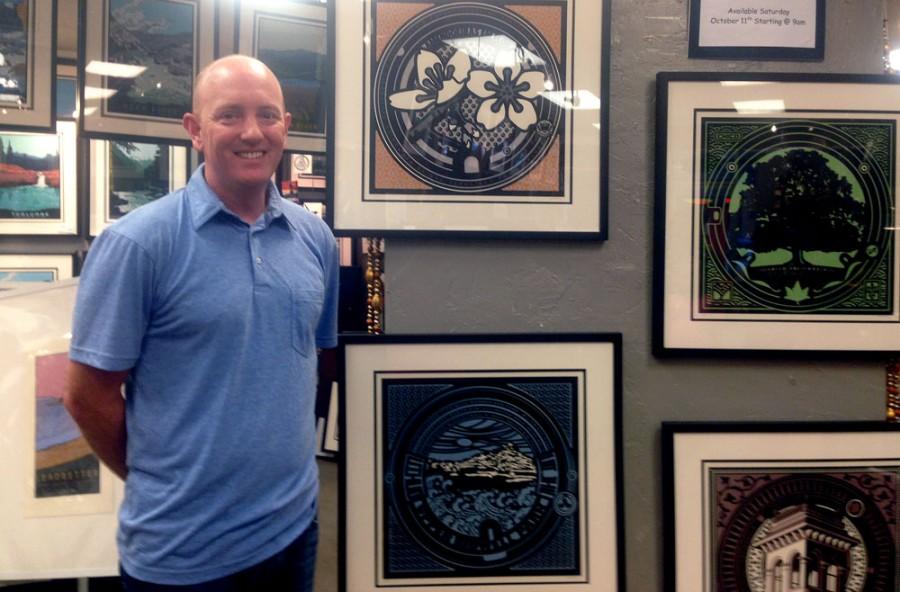 Chico State alumnus Jake Early stands next to some of the prints he created for his 'My Hometown" collection on display at Chico Paper Company. Photo credit: Kristen Moran

Renowned printmaker and Chico native Jake Early’s affection, pride and genuine love for Chico and California is apparent in every bold, unique design he illustrates. Prints from his latest collection, “My Hometown,” were installed on the outside of the Senator Theatre on Friday, adding to his already impressive collection of prints displayed throughout the city.

“It’s kind of like writing a letter to your hometown,” Early said. “I don’t live here anymore, so I miss home. All my friends and all my family are here, and I’m not.”

“I didn’t expect that,” Early said. “It’s really nice. It feels really good to get that kind of recognition. It will probably sink in later.”

President Zingg, who presented the final piece with Early and Gruendl, expressed his pride for Jake’s involvement with Chico and his artwork.

“He really is a treasure,” he said.

Early, a Chico State graphic design alumnus, spent most of his life in Chico until a couple of years ago, when his wife was offered a teaching position at Arizona State University. Even though Early currently lives in Arizona, most of his artwork continues to be about Chico and the Golden State.

“Part of the reason why I can’t do much in Arizona is because I don’t care about it,” said Early. “It doesn’t really feel sincere to do much there … it’s fine, but this home, it’s where I want to be.”

Early has been working on his “My Hometown” collection for about five to six years. He wanted to incorporate some of the things that he thought his three kids would miss by not growing up around Chico and things that he missed doing around town.

Early ended up printing nine out of the 14 illustrations he created for the collection. Over 2,000 replicas were made for the Senator Theatre installation and for purchase at Chico Paper Company.

“It’s really wonderful that he made this whole collection not only for gallery, but for the public as well,” said Jana Strong, a Chico Paper Company co-owner. “It’s a wonderful project. It’s something that downtown really needed.”

Early’s career as a printmaker didn’t start until he was 35, and he accredits the career he has now as the “job that saved me.”

Notable career-related events that lead Early to where he is today include:

Working at a print shop in Chico after graduating from Chico State.
Starting his own graphic design company, which later burned in a fire.
Working as a graphic designer for Enloe Medical Center.
Crafting a printing press in his garage and illustrating and making prints, which eventually made their way to Chico Paper Company.
Beginning full-time work as a printmaker in 2005.

“I didn’t set out with a plan,” Early said. “It’s one of the only things that I have enjoyed doing my whole life. I can’t remember a time where I wasn’t drawing … it’s kind of cliche, but do what you like to do.”

Kristen Moran can be reached at [email protected] or @kristenvmoran on Twitter.