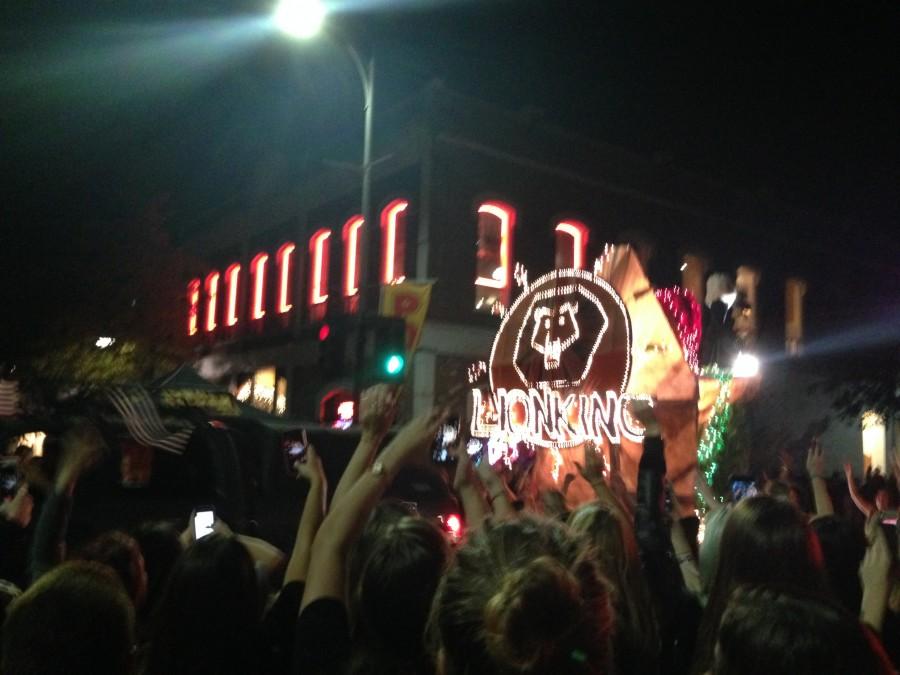 A spectacle of creative costumes, fun themes and lots of colorful lights flooded the evening of Oct. 18 for the annual Chico Parade of Lights.

Hundreds of people gathered to watch glow stick-clad marchers in ballerina, cowboy, karate and other getups shuffle and dance their way through downtown Chico’s streets.

Chico State fraternities and sororities put together floats based on popular Disney movies. “The Little Mermaid” float had the crimson-haired Ariel waving from a clamshell. The “Hercules” float had Zeus sitting regally on his throne made of clouds. Characters from “Toy Story” walked along the side of their float of wooden toy blocks and gave wide-eyed children high-fives.

The float based on the recent Disney hit “Frozen” delighted the crowd with everyone’s favorite snow queen as the main focus.

“I was so excited when I saw the ‘Frozen’ float,” said Sandra Baker, a Chico resident. “My (two daughters) love that movie.”

Baker’s 7-year-old daughter Kaitlin jumped up and down with an ear-to-ear grin at the mention of her favorite movie.

“I almost fainted when I saw Elsa,” she said.

While all the Disney floats were a hit, there was one that seemed to stand out the most: “The Lion King” float by Alpha Sigma Phi and Sigma Kappa.

As it rolled down the street, spectators were treated with a detailed depiction of one of the movie’s most famous moments: the “Circle of Life” scene when Rafiki holds baby Simba above the crowd and Mufasa stands proudly behind them.

People along the street cheered, clapped and snapped as many pictures as they could before the float disappeared from view.

“‘The Lion King’ (float) was definitely my favorite,” said 10-year-old Jake Richardson of Chico. “I wish I could see it again.”

The float seemed to have struck a nostalgic cord with some members of the crowd, causing them to reminisce about the last time they watched “The Lion King.”

“I loved that movie since the ’90s and probably haven’t seen it since,” said Maria Gomez, a Paradise resident. “I think I’m going to go home and rewatch it now.”

Matt Koenig, a junior business management major and Alpha Sigma Phi member, had a hand in creating the Rafiki and Timon characters and the waterfall.

A lot of work and hours went into making the float, he said.

Every year, the Greek houses are assigned themes by the Greek council, Koenig said. And despite other sorority and fraternity houses also creating floats with the same theme, there wasn’t any rivalry. Everyone just wanted their hard work to pay off and to present the best movie representation possible.

The presentation of floats in the annual Chico Parade of Lights brings Greek Week to a close for the fraternities and sororities.