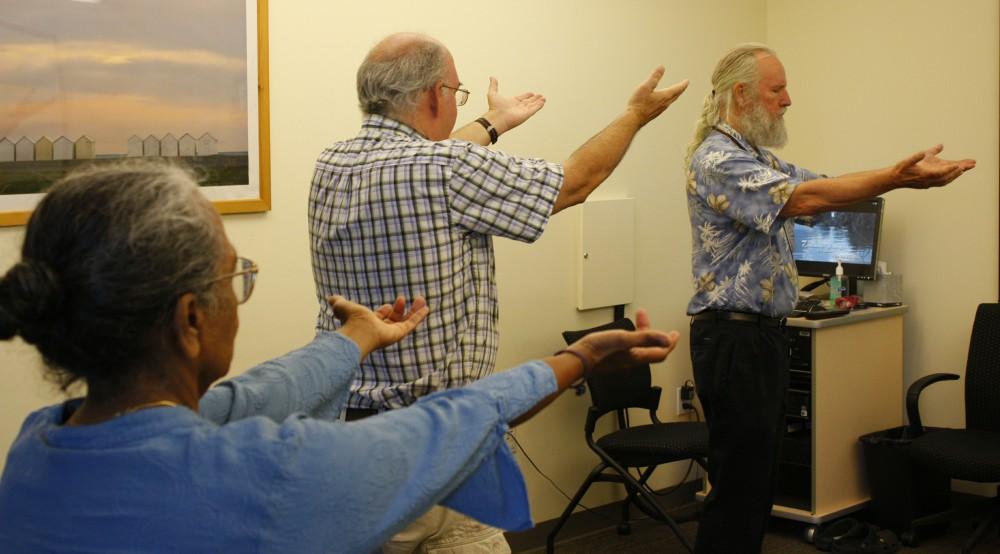 David Philhour, manager of the Computer Labs for the College of Behavioral and Social Sciences, runs the 50 minutes afternoon sessions.

“I realized that the benefits of meditation are increasing by a continuing practice,” Philhour said. “So I decided to start offering a noontime meditation and Qi Gong group.”

The sessions start with a half hour of Qi Gong, which works directly with the energetic system. It’s a form of moving meditation that is intimately connected with the Chinese system of medicine.

“In practicing Qi Gong, one is brought to the present moment at the level of sensation,” Philhour said. “The exercises are not complicated and very repetitive. You can give your brain a break and just feel the movement of your body and the flow of energy as you join your mind to your body.”

Many of the exercises are said to boost the immune system and improve general health, Philhour said.

Following Qi Gong, individuals engage in 10 to 15 minutes of seated meditation, which concentrates on the breathing.

Rafaela Gomes, a junior Spanish major, said the most relaxing part of the sessions are the breathing movements for the back.

In the last five minutes, individuals engage in walking meditation, where Philhour said they take the calm peacefulness found in the seated meditation, out into the world for the rest of the day.

Many of the exercises that are performed come from a Tai Chi video or from the many Qi Gong videos on YouTube.

“I just focus on the movements and I don’t think,” Gould-Ring said. “I’m just breathing and moving.”

The idea of including meditation sessions on campus came from several years ago. The Mindful Campus Group at Chico State held a Day of Meditation right before finals week to help students deal with the increased stress at that time of the semester.

Philhour created a presentation for the group that centered on moving meditation and Qi Gong.

The sessions were generally well received and based upon his own 50 years of mindfulness practice. Philhour was inspired to continue meditation and Qi Gong on campus.

“Qi Gong has helped me find the stillness within the movement and greatly improved my seated meditation,” Philhour said.

Noontime Meditation and Qi Gong takes place every Monday through Thursday, from noon to 12:50 p.m., in SSC 426.