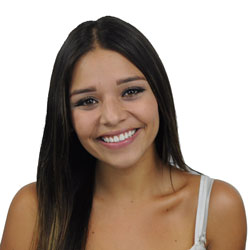 Growing up, my dad came from a strict Catholic community where it’s the norm to be with someone of Hispanic heritage. Being raised in a Catholic household, I disagreed with some of the values and the judgment if anyone did anything out of tradition.

The way I was brought up has a lot to do with my relationship expectations. For me, it’s not about the color of their skin; it’s more about how educated and well-mannered they are.

The only type of guys I’ve dated are Caucasian. Don’t get me wrong, I can appreciate a good-looking Hispanic guy. That shouldn’t mean that I should be obligated to seek a relationship with them just because it’s what society considers to be normal.

There are times when I’ve wondered if something was wrong with me. My sister had married my brother-in-law, who’s Mexican, and my brother had plenty of Hispanic girlfriends. Most of my Hispanic friends also found themselves attracted to guys of their race.

I used to be anxious whenever I’d bring a boyfriend of a different race around, because I would worry about being judged by friends and family for not dating Hispanics. However, that never prevented me from pursuing a relationship with them.

When my parents got divorced, I lived with my mom and luckily she’s been completely accepting of who I date. Because of how much society has socially progressed, it’s surprising to me that people are still judgmental of those who are in an interracial relationship.

Since I’ve had experience with this kind of relationship, I think that it has taught me how to be more open-minded about who I date­­. When it comes to love, color should never matter, but instead, who they are as a person.