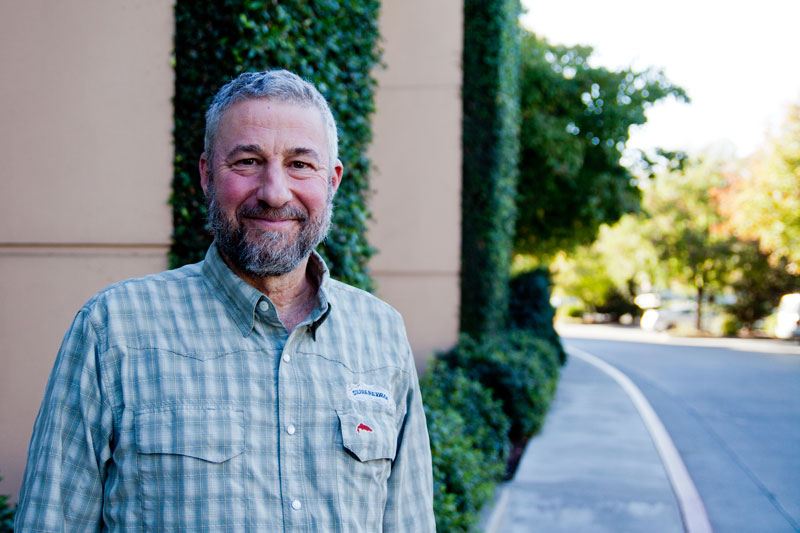 Here, he brewed Sierra Nevada Brewing Co.’s first test batch of beer — not its flagship pale ale but a stout.

Grossman, president and owner, had spent years converting that old warehouse into what would become Sierra Nevada Brewing Co. He traveled from farm to farm in search of high-quality hops. He taught himself refrigeration and welding to repurpose old dairy equipment.

Funding his project and supporting a family with odd jobs, Grossman was determined to contribute his mix of hops, malts and ales to the craft brew industry.

After almost 34 years, Sierra Nevada has gone from that old warehouse that first brewed five barrels in one day to producing more than 786,000 barrels a year of its iconic craft beers.

The Orion sat down with Grossman to talk about his journey from Southern California to Chico, opening up his home brew shop on Broadway Street and expanding Sierra Nevada to the East Coast.

Tell me about your close friend’s father who exposed you to home brewing. How old were you? What was that experience like?
I probably first saw him making beer when I was 7 or 8 years old. He was a very avid winemaker and home brewer. Regularly I would see him brewing something. Early on it was just smells and odors and bubbling airlocks. I wasn’t too clued in on what exactly was going on, but as I grew up, I became more aware of what he was doing. I became fascinated with the alchemy and the science of brewing.
You grew up in Southern California and moved to Chico when you were 17. In your book “Beyond the Pale,” you describe your first visit here as an unbearably hot June evening and eventually ending up in a hotel room with blood splattered in the bathroom. What was it about this city that you fell in love with?
The next day we went to Bidwell Park and biked around and it was much different from where I grew in up Southern California. It had a real small-town feel. The students were out so the town was pretty dead. I thought it was a neat, quaint little college town. I ended up riding my bike around town and applied for a job at a bike shop and got a job offer and called my mom up and said, “I’m not coming home, I’m going to move to Chico.”
Before you moved to Chico, you went on a bike ride along Highway 1 on the California coast and first tasted Anchor Steam Beer. How significant was that moment to the creation of Sierra Nevada?
I was going up to Chico State with a couple of my high school buddies who were going to be attending Chico State. They were dropping me off to start a cycle tour on the coast. At that point I was a pretty avid homebrewer. Even though I was only 17, I had brewed quite a few batches of beer by then. I was aware of Anchor and Fritz Maytag (former owner of Anchor Brewing Company and who many consider the father of modern microbreweries) from my homebrewing connections. That was the first time I had the chance to taste a bottled product.
A year after you opened The Home Brew Shop on the 300 block of Broadway Street in 1976, you and your business partner amicably parted ways. Your wife Katie came to help you at the shop with your 3-week-old daughter Sierra. What do you remember most about your time at The Home Brew Shop?
It was my art and passion and fun to do, but I had a young child and not a lot of money so I kept working at one of the bike shops to make ends meet. We ran The Home Brew Shop somewhat hobby but with the hope that the business would grow enough so we could support ourselves.
In 1980, when you were in the middle of your plans to build Sierra Nevada, the U.S. brewing industry wasn’t looking so great, with only 40 legacy breweries in existence. Was that discouraging to your plans?
The bigger breweries were monopolizing the marketplace and producing pretty similar light lager styles of beer, so I was certainly aware of the market enough to know there was a niche for beers like ours. I wasn’t too aware of what was happening in the Midwest and East as far as brewery closures until I joined the Brewers Association of America, which I joined in ’81 or ’82 and started going to those conventions. They were back in Florida and there I got to meet the other smaller brewers in America. Then I became more aware of their plight and how hard they were struggling. After I got into it, I realized, “Oh, this doesn’t look too good in the small brewing industry,” but before I was not as aware.
What was it like to travel to Florida and talk to all these brewers?
All the brewers that were in Florida at that meeting were from really established, old family breweries. Their plight was pretty challenging at that time. They were losing market share, they had old breweries and they didn’t have the money to reinvest in them. They were at a disadvantage in the marketplace.
Did they offer you any advice?
No, they were actually looking to us as a sort of new spark in the industry. Fritz Maytag had been an active participant of the association and he was the one who suggested I join. He was really the shining star for them because his business was growing and most of these other smaller breweries were shrinking. I think a lot of them thought what he was doing was the vision for the future. Others didn’t get that higher-dollar, more-robust beer style was going to be what allowed you to survive as a small brewer. A lot of them didn’t make that connection soon enough and ended up still going out of business.
Why was that your plan from the beginning, to not mimic the bigger breweries but instead focus on higher-end beer?
The business model doesn’t work for a really small brewery to make mainstream beers. You don’t have mass marketing. You have to really produce a distinctive product so you can charge enough to make ends meet on a small scale, and to hopefully attract a different kind of customer that is willing to pay more.

What qualities did you want to establish in your beer when you were first dreaming up Sierra Nevada?
We realized that we needed to make a distinctive product that would stand out. Without any advertising or marketing budget, the only way we could survive was to make something that really was a niche of the brewing industry. More flavorful, more robust and hoppy ales were sort of where we thought we could hang our hats, and that was the direction we headed.
Why name your brewery after the Sierra Nevada mountains? What made them so special?
I spent a lot of time in them in my youth. The fellow who got me started in homebrewing was an avid backpacker and took us kids up in the High Sierras when were young teenagers. As we grew older, we continued to go backpacking and hiking in the east side of the Sierras. We would make the trek from Southern California to Bishop and North Lake and areas on the east side.
On Nov. 15, 1980 — after years of financial struggles and gathering equipment and materials — you brewed Sierra Nevada’s first test batch of beer. 150 gallons of stout, even though you had been testing your pale ale recipe for months. Why did you start with a stout instead of the pale ale?
We thought that making a stronger, dark beer would cover some of our sins. We knew we weren’t going to sell it and we figured we had a pretty good shot at making a drinkable stout right off the bat. As the beers get a little lighter, the flaws show up and we knew we weren’t going to do things perfectly in our first brew. And we enjoyed drinking stout, too.
When you first started, you bottled using re-purposed beer bottles and tried to sell them to the bars in downtown Chico. What was it like playing door-to-door salesman?
We carried a little ice chest around with us and took individual bottles out and let people take samples of our beer. We were able to sell it to 10 or 15 places.
Almost 34 years later, Sierra Nevada has transformed from a small operation into one of the top 10 biggest breweries in America. What do you attribute to its massive success?
We’ve had a lot of dedicated focus that helped us get there. It’s not just me by any means. We worked really hard and we were in the right place at the right time. We all worked hard to make great beer. We continued to grow as the industry grew with us.
Why do you think the craft beer industry has grown so much?
The timing was right back when we started. Small bakeries were opening up. People didn’t want to just buy Wonder Bread, they wanted bread with character and flavor. The time had turned. For us, we had a product that was well received because it was handmade and unique and different and appealed to a lot of people’s sensibilities.
You and your son searched more than 200 locations for a new brewery. Why did you choose Mills River, North Carolina?
It wasn’t just my son and I, we had a team of senior management. The area we found is beautiful. The area has a lot of culture things going for it: food, recreation, kayaking, hiking, mountain biking. It seemed like a good place to build another brewery and a good fit for us.
Where do you see the craft beer industry going in the future?
It can’t grow at the current rate forever. There’s close to 3,000 breweries now and we could easily see 4,000, 4,500 or 5,000. I don’t know if we’ve seen the top yet, but it is getting more and more challenging to get distribution and raw materials. At this point in time, it’s healthy and growing and I suspect that to happen for a number of more years.
It’s your birthday on Nov. 11. How old are you turning and what is next for you and Sierra Nevada?
Sixty. As far as me, I’ll hopefully be able to wrap up the construction in North Carolina in the next few months. Hopefully by February or March, we’ll be fully wrapped up there. Then my plan is to take a little bit of a breather, not work so hard. I’ve been traveling pretty much every other week to North Carolina for the past 2 1/2 years. I’d like to take a vacation.
Ernesto Rivera can be reached at [email protected] or @ernestorivera on Twitter.