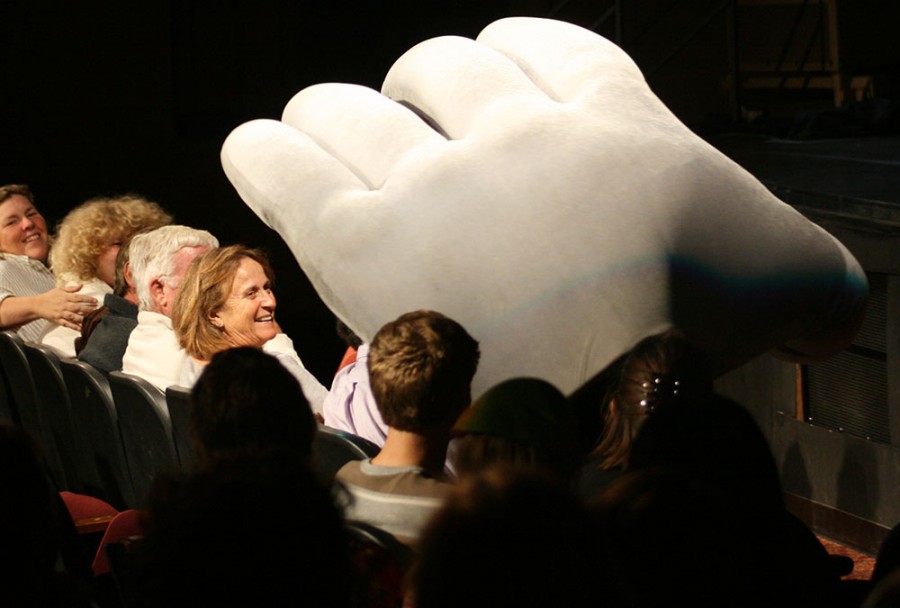 Audience members interact with one of the mimes of MUMMENSCHANZ, portraying a giant hand. The troupe performed a captivating theatrical show Tuesday night at Laxson Auditorium. Photo credit: John Domogma

If anything, MUMMENSCHANZ is captivating.

The show, presented by Chico Performances, was broken up into skits, in which an actor or pair of actors appeared on stage completely silent and dressed in either all black or an odd-shaped homemade costume.

These costumes pushed the limits of what the human body can do, the most notable being a pair of giant hands, a slinky man, clay-faced rivals, a romantically-involved plug and outlet and an over-sized self-deflating cheese ball that broke the fourth wall.

The show began with one of the hands peeping out from behind the curtain, attempting to pull it open.

It eventually got a hand from its counterpart, which had been sitting with the audience. The pair slapped five, had a quick thumb war and exited with applause to get the show started off on the right foot.

Slinky Man wore some sort of bright yellow industrial-sized tubing flexible enough to bend but rigid enough to stand up straight and support a balloon that looked like an exercise ball.

His personality was initially shy but curious, akin to the Pixar lamp, especially when he noticed the audience.

That ability to communicate personality visually is what makes MUMMENSCHANZ work, much to the credit of Floriana Frassetto, Philipp Egli, Raffaella Mattioli and Pietro Montando, the show’s actors.

They’re able to put their characters into separate worlds that the audience is welcome to intrude upon. They pretended not to notice they were being watched until they made the audience laugh, which sparked some sort of mutual intrigue that often led to competition for attention between characters.

In another skit, a clay-faced man dressed in all black had his coveted yellow flower stolen by a pompous, sharp-chinned, clay-faced rival.

Sharp Chin mocked and flaunted his superiority while the flowerless man unsuccessfully tried to mold his face to look like him. The mimicking eventually escalated into a sculpting competition ending with the two getting their faces stuck together.

Later, two actors came out on stage dressed as a plug and an outlet in a romantic, comedic skit. The plug took one look at the outlet and was mesmerized. It flirtatiously encircled and admired before finally making a move and plugging in, during which the stage lights flashed brightly before going out when the pair disconnected.

The final skit involved a gargantuan red-orange inflated ball that the actor manipulated to have human facial features. It rolled around, smiled and at one point jokingly threatened to launch into the front rows of the audience.

It’s these vivid characters and the troupe’s imaginative storytelling that makes MUMMENSCHANZ a must-see event for anyone interested in cutting-edge theater. It is one of the most creative, interesting performances out today.