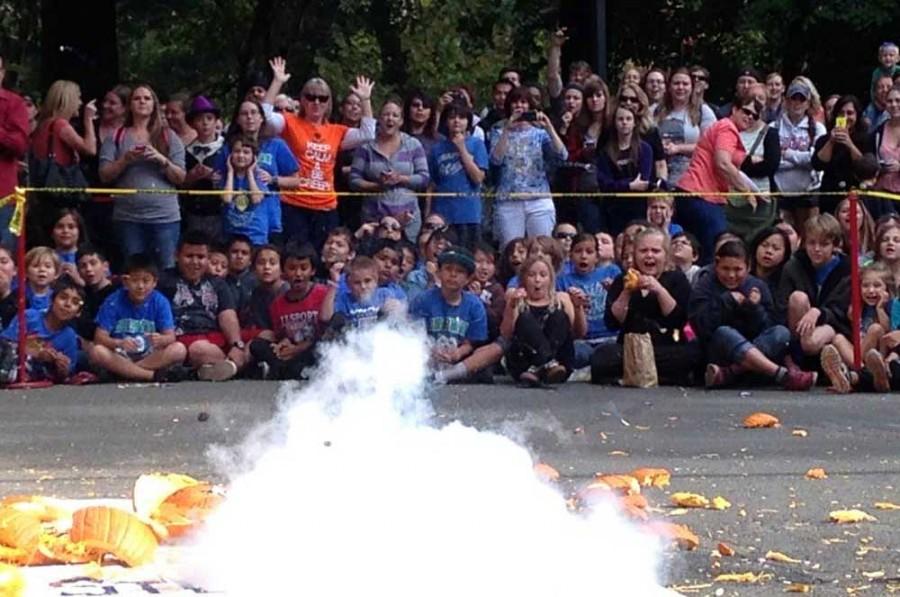 Crowds of elementary school students gathered in front of Butte Hall for for the 27th annual Pumpkin Drop on Thursday afternoon.

The Society of Physics Students faculty and students dropped pumpkins as a learning experiment and outreach program for children.

The event gathered crowds of about 250 to 300 elementary school students, according to the event organizers. Pumpkins were dropped from four stories high. They were filled with water, feathers, “flammable stuff” and liquid nitrogen, drawing cheers and squeals of excitement from the audience.

“You really draw from the energy of the crowd,” said Jacob Knoles, a senior physics major dressed as Galileo for the event. “They were going nuts.”

The event is both an outreach program and a tradition that has been at Chico State longer than he has, he said.

“It started, the way most things do here, with a group of crazy undergrads 27 years ago,” Ayars said.

Ayars was the emcee for the event and introduced students, such as Knoles, who were dressed as physicists from multiple scientific eras and gave information on physics to the audience. Ayars timed the pumpkin drops to Pyotr Ilyich Tchaikovsky’s song “1812 Overture”. Each splat of the pumpkins were within one-tenth of one second with the cannon reports of the song.

“This was one of the better years in terms of pumpkin synchronization,” Ayars said.

After the event, a group of elementary students went to Alumni Glen by Holt Hall to ask questions of the physics students.

“We tried to bring some of that historical progression of science to the event,” said Tucker Hartland, senior physics and math major.

“This is an important opportunity in outreach,” said Daniel Lund, senior physics and mechatronic engineering student, who dressed as Aristotle. “It’s important that they learn just how relevant and important physics really is.”