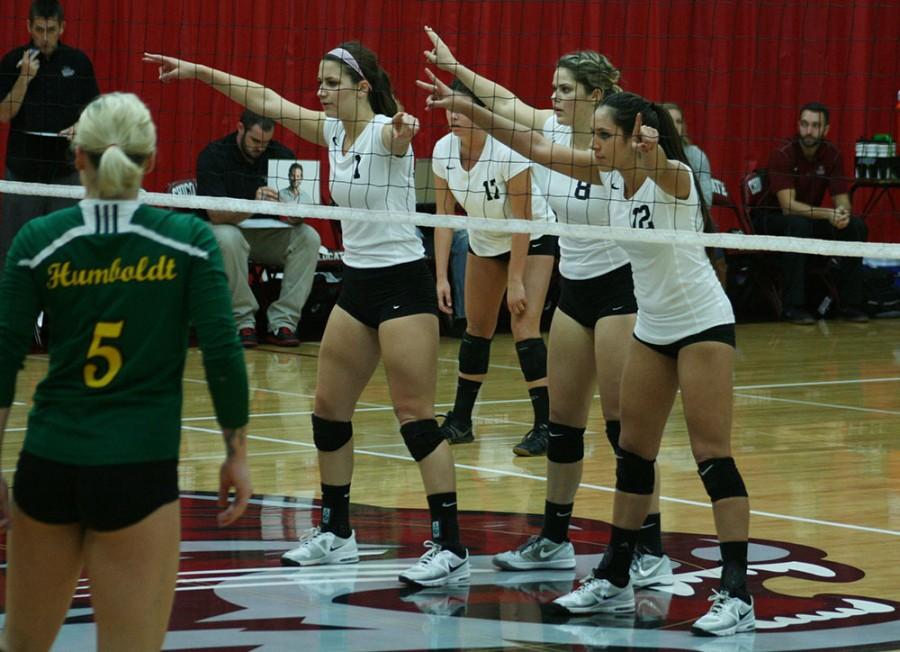 From left to right: Kristyn Casalino, Shannon Boling and Olivia Mediano set up before a serve for Chico State. Photo credit: John Domogma

The Wildcats won the first set rather easily, beating the Jacks 25-17. Senior Ellie Larronde had 17 kills to lead the team.

The Jacks picked up a win in the second set, 25-18. The third set saw momentum turn to whichever team was willing to step up. Emily Duran tied a season-high with 27 digs, putting the senior at 1, 234 digs for her career.

The Wildcats took the momentum and ran with it in the third set to come back from being down 22-24 and win 28-26. Assistant coach Tom Gott said the team’s aggressiveness and execution of the game plan was great.

“We like to think we play our best volleyball in the 20’s,” Gott said. “We talk a lot about playing your best during that 19 to 20’s point wise. We like to call it ‘the red zone.'”

Late in the fourth and final set, the Wildcats fell down 18-22 to the Jacks, but Larronde credits the team’s defense in coming back for a 25-23 win.

“Even though we were down in that fourth game, it was just a matter of getting some balls up that we may not normally get up, getting some key kills, key blocks and it was huge,” Larronde said. “Everyone was just on their game tonight and that was really important.”

The Wildcats move to 10-10 overall on the season and 8-8 in California Collegiate Athletic Association play. Chico State plays at home again Saturday against Cal State San Bernardino, starting at 7 p.m.