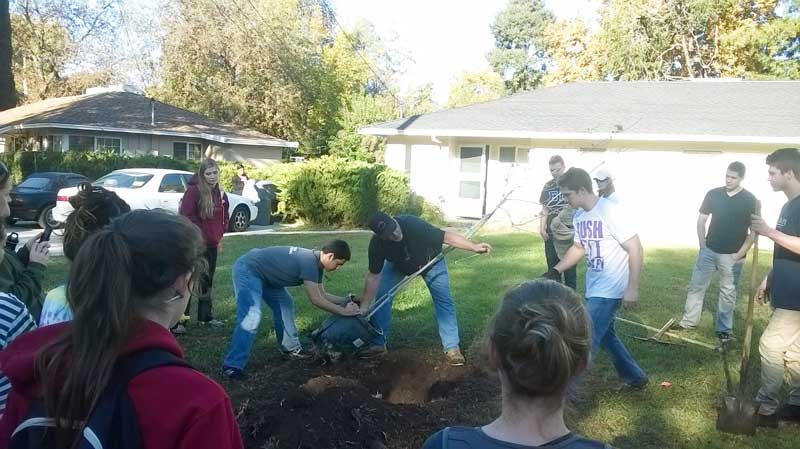 Student volunteers planted 14 trees on city-owned housing on Humboldt Avenue across from Humboldt Park for Blitz Plant 2014, a special event designed to compensate for two oak trees cut down and removed in March.

“The idea and slogan for this event is to ‘plant the right trees in the right place,'” said Mark Stemen, Geography and Planning professor.

During Blitz Build 2014 when Construction Management students built duplexes for the Salvation Army, volunteers cut down several trees on the corner of Salem and 8th Streets which were in the way of construction. In return, new trees were to be planted to make up for the environmental effects of the lost trees.

Stemen, also a member of the Butte Environmental Council, said that Blitz Plant is a collaborative effort between a number of different organizations.

“My class found the area and selected the trees,” he said. “Construction Management would plant them, the Salvation Army paid for the plants and materials, and the city had us get all the paperwork together and agreed to water the trees.”

The trees were specially selected in order to fit their surroundings, Stemen said. For example, most of the trees facing the street on the west side of the block were glow maples, a species that would never grow tall enough to disrupt the power lines directly above.

All volunteers at the event were either Chico State students or faculty, organizers said. They estimated 30 people, far more than the expected dozen organizers estimated the day before.

“As soon as you say something, they’re all like, ‘Alright,'” said Halliday. “I mean, It’s always a struggle to wake up on a Saturday morning, but pretty easy to get everyone out. And we got most of our guys too, so we were willing to tear it out.”

Near the end of the event, Stemen’s Geography and Planning students planted acorns at an empty lot farther down Humboldt Avenue, going a bit past the planned noon stop time. But Stemen told everyone not to rush to finish.

City contractors did not have a third site at Humboldt Avenue and Cypress and Pine Streets ready in time to receive trees. There will be another Blitz Plant some time in December to plant those trees, said Stemen.