Men's golf finishes middle of field in Division I tournament 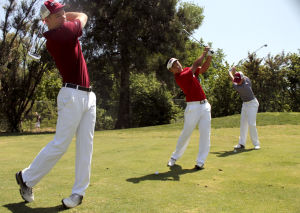 The Chico State men’s golf team ended its first tournament in sixth place Tuesday after the final round of the Itani Quality Homes Collegiate, hosted by Washington State.

The Wildcat’s, who are ranked No. 13 in the inaugural NCAA Division II coaches poll, held their own as they came in with a 5-over par 285 to finish the tournament in a tie for sixth place with the University of Santa Clara at 17-over par.
Sophomore Alistair Docherty (70-68-72) finished individually at a tie for 13th at even par, a fall from Monday’s play. Sophomore Lee Gearhart (71-74-69) ended in the top 25, finishing 2-under par.
Washington State won the tournament, followed by Cal State Fullerton, Sacramento State, Idaho and San Jose State.
Chico State golfers will have a few weeks off before competing in the Golfweek Fall Invitational at Crosswater Club in Sunriver, Oregon starting Sept. 30.
Jordyn Provence can be reached at [email protected]
Delete Image
Align Left
Align Center
Align Right
Align Left
Align Center
Delete Heading