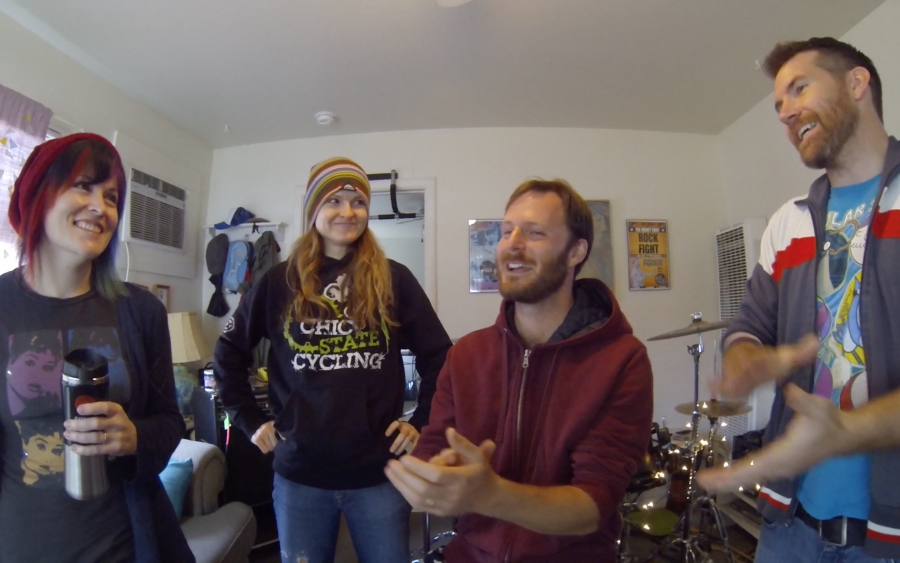 Local rock band Furlough Fridays took a break during its practice session Nov. 22 in Chico to chat with The Orion about Pamela Anderson, the band’s dynamic and sticking together. Half the band, which is made up of two married couples, lives in Redding.

Furlough Fridays’ next performance in Chico will be for Wanderers & Wolves’ EP release show Dec. 6 at 1078 Gallery.

You have been a band for eight years. What has kept you together?

Linda Bergmann, or Minnie Mental, singer: Stubbornness, and we iron through the problems and communicate issues so that we make it work. … There was a bandmate who was letting his girlfriend get in the way, and so I decided to dump the whole band (once) because of it.Adam Yates, guitarist: And when Meagan and I moved to Redding, there was talk of us discontinuing. But Linda kept us together.Linda: They drive here or we drive there every weekend, and every time we do part of my soul dies. But we’re willing to do what it takes to stay together.

How did the four of you meet?

JP Bergmann, drummer: When Adam and I met at Sears, we had both just gotten out of bands after both our bands broke up, and we were like, “I’m never gonna be in a band again.” Then our wives decide to start a band.Adam: We weren’t supposed to be in it at first.Meagan: We were going to make it an all-girl band.

You consider your genre rock?

Linda: Yeah, but today we are going to have to go acoustic, ’cause Adam broke (JP’s) amp last night.Adam: My guitar broke it.Meagan: Yeah, Spamela died.

Why is the amp called Spamela?

JP: It’s named after Pamela Anderson. I had a thing for “Bay Watch” at the time. I think I was probably 13 when I got it, and I was a bit enthusiastic about that show then.Adam: What 13-year-old boy wasn’t? Although, Yasmine Bleeth was the reason I watched it.

Where did the stage name “Minnie Mental” come from?

Linda: I used to be the dietary supervisor of a convalescent home. I worked as part of an interdisciplinary team, which had regular meetings concerning the care of their residents. They would often discuss whether someone was given a “mini mental,” which is a small list of questions asked to determine whether someone has Alzheimer’s. Out of boredom, somehow I decided it might make a cool (stage) name. Plus, I’m short, so it fits.

Minnie Mental: Oh, we inspire each other. Also, we are inspired by goals and the need to accomplish those goals. Getting a Cammie was one of our goals. Getting on the cover of The Synthesis was a goal we had for like, four years, and we finally got that done.

What’s the band dynamic like since you are all so close?

Minnie Mental: I’m always trying to mellow out the nerdiness. Just being like, “Let’s just calm it down a little bit.” It’s okay to be a little bit nerdy but …JP: Adam Yates, what is your favorite thing about playing small bars with very few people in the audience?Adam: Hitting them in the head with my guitar on accident when I’m really excited.Meagan: Yeah, Adam tends to move around a lot on stage.Adam: But I don’t know anything about this nerdiness you speak of.Minnie Mental: Unzip your jacket.Adam: (Unzips jacket slowly, revealing a shirt featuring characters from Cartoon Network’s “Regular Show”).

What does the future look like for Furlough Fridays?

Linda: We kind of want to do this forever. Whether that’s realistic, I don’t know, but look at The Rolling Stones. If you have a passion and desire to continue and a means, then what’s stopping you?