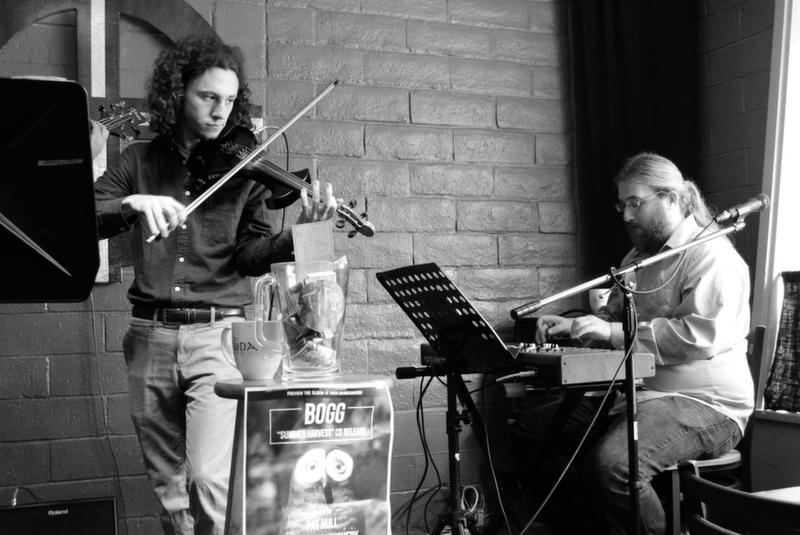 Once upon a time, in a pre-Bogg world, drummer Michael Bone and keyboardist Joshua Hegg were stranded in Chico during summer and felt the need for a musical outlet.

“Most people were out of town and it was the summer time,” Hegg said. “And we were really interested in improvisation and jazz-type stuff.”

The duo’s other band, Clouds On Strings, is a more structured, progressive rock band that doesn’t quite satisfy that improvisational hunger. So the now popular modern jazz quartet formed, adding Clouds on Strings ‘mates Matthew Weiner on violin and Gavin Fitzgerald on bass.

Since then, the quartet has made strides in the Chico music scene, promoting and starring in shows produced by their local production company, Uncle Dad’s Art Collective, playing every Friday at Cafe Coda and performing in various venues across the city.

Uncle Dad’s had its one year anniversary of its first show Nov. 21, and Bogg’s newest album will be released Dec. 13.

Bone and Hegg, both alumni, met at their Chico State orientation, which both attended as future recording arts majors. If anything, the recording arts program helped them figure out what they didn’t want to do for a living, Hegg said.

“It was a great department. I’m glad we went through it,” Hegg said. “I always wanted to be a performer and really wanted to record, but there’s always that stigma, you know, that you can’t just be a musician professionally. You gotta do something else. But I think it’s easier to be a musician than it is being an engineer.”

Chico seemed like a random place to go to school, Hegg said. Though he only came up here because of Chico State’s recording arts program, it turned out he ended up in a well-positioned place for musicians, near cities like San Francisco and Tahoe but with more affordable rent prices.

Hegg and Fitzgerald went to high school together in San Diego, but weren’t friends then. They only knew of each other from marching band before running into each other in Chico.

Weiner, a violinist and also a Chico State alumni, originally joined the band because it wanted to go on tour but needed a horn player to cover the parts. The musicians thought the violinist just might work better.

“And now I know the difference between trumpet and violin,” Fitzgerald joked.

So Bogg was formed, using a name that is actually Bone and Hegg’s names smushed together.

In bigger cities, like San Francisco, companies and venues are often looking for musicians and bands. There are plenty of opportunities.

With the formation of Uncle Dad’s Art Collective, the boys of Bogg started branching out, not just performing but becoming a driving force behind creating local dance, theatrical and musical productions to promote the Chico arts scene and hopefully get local bands national recognition.

“There are about 10 or so bands in Chico right now that could be huge,” Fitzgerald said. “These are bands that I bet half of the Chico State campus would love. … If the students would come out to the $5 all-ages shows, we would have a real music scene easily.”

In September, Uncle Dad’s Art Collective hosted “Led Zeppelin IV” at Chico State, bringing bands from across the community to perform covers in a night of live music of all styles.

“What we’re trying to do is generate interest that you can’t escape,” Fitzgerald said.

“(We) had about 200 community people go, which is, you know, good,” Hegg added. “But if 150 were students, what percentage of students is that? So, like, if 3 percent came, we would get attention from the cool Bay Area bands and people might start to take us seriously.”

This is on top of the Energy Plant Sessions video series the group co-produces with Energy Plant Arts and Mixed Media Mixers at 1078 Gallery the collective actively produces every month to highlight local artists.

“For the release show, we’ll be able to hit it hard and be more open than we normally would during breakfast at Cafe Coda,” Hegg said. “When we’re not background music for people that are trying to eat, we can really take it off the deep end.”

Bone said that this one feels like more of what the audience would hear the band actually play live, unlike its last two albums.

“On the first couple of albums, we got really bombastic,” Hegg added. “We had horn sections and a lot of guest vocalists. And then we went on the road and we’re like, ‘Shit, we can’t play this album.’”

The Boys Is Safe by Bogg

“Summer Harvest” was recorded live, with no overdubs.

“It’s like a stamp in time doing it live, because there are no overdubs and there are mistakes in there. It’s like, ‘This is what we sounded like this summer,’” Hegg said. “‘Four dudes trying their best at the time.’”