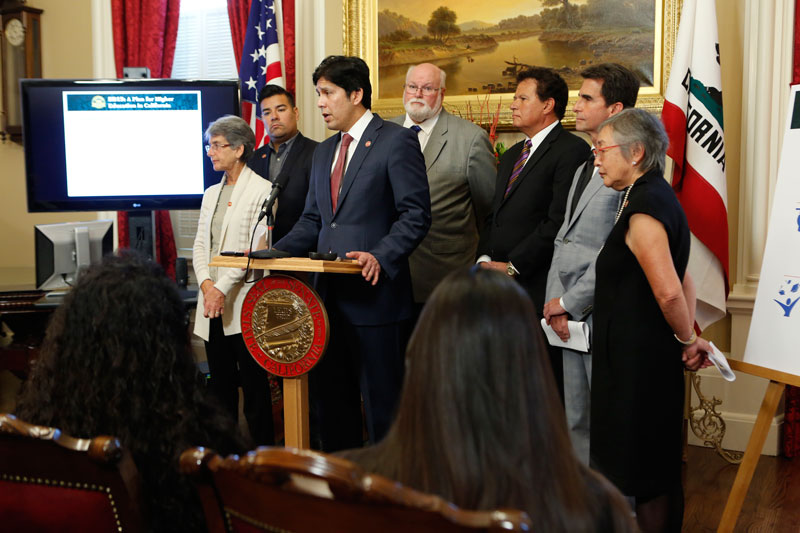 A new bill introduced Dec. 2 by state senate Democrats aims to keep tuition steady and get students out in four years in the California State University and University of California systems.

SB15, co-introduced by Senate President Pro Tempore Kevin de León, D-Los Angeles, will give an additional $342 million to higher education, according to a press conference held by the bill’s authors. If passed the bill will:

Give the CSU and UC systems each $75 million for additional sections and academic advisers.Create the Completion Incentive Grant for students that will provide $4,500 throughout four years if they enroll in 15 units a semester.Create 10,000 additional slots for students in the California State University system.

But all this money has to come from somewhere. Co-author Senator Marty Block, D-San Diego, said in a press conference that they’ll get the annual funds from the following sources:

A breakdown of costs and funding

Getting students out of the CSU and UC systems in four years is a big concern the bill’s authors want fixed. The average CSU student graduates in 6.1 years, according to de León.

There are many reasons it’s taking students longer to graduate, Block said, including:

The bill’s authors hope SB15 will fix each of those concerns. According to Block, if students take 15 units each semester, they will graduate in four years and save $60,000 compared to graduating in six years.

“By finishing two years earlier … they get out in the workforce two years earlier, making money for themselves, their families, becoming taxpayers which is good for the state of California,” he said.

The average time it takes freshman to get a degree at Chico State is 4.7 years, according to the university’s website.

The bill’s second-largest fund comes from eliminating the new Middle Class Scholarship. The scholarship is in its first year and was created to aid students with family income up to $150,000.

Senator Mark Leno, D-San Francisco, said repurposing funds from the scholarship to SB15 will benefit a greater number of students.

“With a closer look and review we can decide how we can use those dollars more wisely to benefit more students, to increase graduation rates and save student debt cost,” he said.

Currently there is $36.8 million awarded from the scholarship to students in the CSU system, according to data from the California Student Aid Commission. About 58,000 CSU students were offered the middle class scholarship and had an average age of 23 and an average household income of $85,266.

The new Completion Incentive Grant will be awarded to students with financial need but will also consider middle-class students, de León said.

CSU Chancellor Timothy White released a statement in support of SB15 and called it a “critical need to develop and sustain a well-educated California citizenry to fuel California’s economy today and in the decades ahead.”