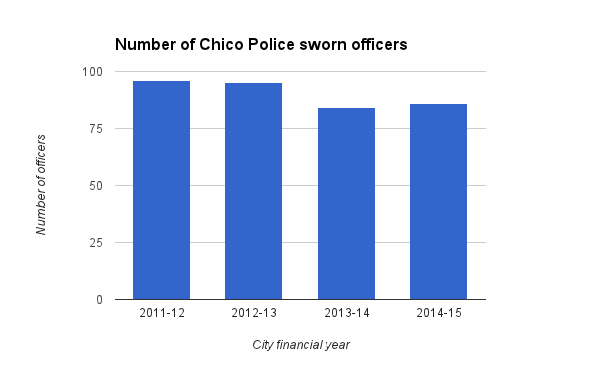 Chico police are in dire straits with staff levels below what the department and city need to serve the community, police sources said.

Low general staff has many negative effects on police work, said Ford Porter, Chico police captain. Porter is in charge of the operations division, the branch of the police who go out, patrol and physically respond to most crimes.

The Police Department currently has 86 sworn officers (police officers, sergeants, lieutenants, captains and the chief). Four of these officers are currently in training in the academy, and two more are engaged in field training and are not available to respond to dispatches as of November.

“Where we’ve said we need to be all along is probably about another 15 to 20 higher than that,” Porter said.

The largest number of officers the department has ever had was 102, between 2006-08, which is near where Porter places the ideal staffing level. Since then, staff levels have fluctuated, but declined overall.

This has had a negative effect on the ability of Chico police to do anything but the basics of police work, Porter said.

Standard police practice for most crime scenes is to send at least two police then leave at least one officer to cover the paperwork and ensure the scene is covered until all police work is done.

According to California Department of Justice data, if all crimes in 2013 were divided evenly among sworn Chico police officers, they would have responded to about 33 serious crimes on average. However, Porter said that because sworn officers includes the chief of police, managers and officers who aren’t able to respond to crimes, the actual number of serious crimes a patrol officer sees is many times more than that.

One change made in light of the the reduced numbers is there are no more task groups which go out and focus on issues that police have identified, like homeless camps or dangerous neighborhoods.

Another issue Porter noted was that the support division’s number of detectives was down, which means it has become hard to investigate crimes in the long run.

“Really all we’re able to do is stuff that’s mandated by law, like sexual assault-type investigations and/or if there are serious bodily crimes, shootings, things like that,” he said. “Those are the crimes we have to prioritize and take those and just don’t have the time to get to the other ones.”

Porter said that even if an employer came forward with information on an employee potentially embezzling money, unless the employer knows for certain, Chico police aren’t able to confirm it with detective work.

“We’re unable to really follow up on that, because we just don’t have the staff to do it,” Porter said.

The operations division is not the only part of the police department affected by the reduced staff. The Chico police records office has not had a dedicated crime statistician ever since Robert Woodward was dismissed to reduce the strain on the budget in July 2013.

The police are funded by the city of Chico, which budgets money for all parts of the city’s services every year. In the 2012-13 fiscal year, Chico cut roughly $830,000 from the budget. The department simply has not come back from that, Porter said.

Nancy Wilson, communications and records manager, said the people in the office have the know-how and templates to produce the statistic reports that the California Department of Justice requires from all police departments. But when it comes to more complex charts that can help police predict when and where certain kinds of crimes happen, that’s beyond the abilities of anyone but a dedicated analyst.

“If it’s a basic request, then we have a couple people who can actually run those, create those and get the information,” Wilson said. “If it’s very detailed, we don’t have anyone here who can really do that.”